A Straight Up No Messin’ August Banker!

ALERT! Here’s our new summer anthem: Summer time, and the living is easy. Gigs are pumpin’ and admission is freeeeeeeeee!

A summer anthem needs a whopper party so we’re doing what we love doing – hosting yet another super-bleedin-deadly Bank Holiday Sunday bash at our place on Sunday, 6 August.

Just like we say in our new song, admission is FREE. We’re charging you the exorbitant sum of NO EUROS to come along and have the craic with us. We’re throwing in some brilliant bands, awesome DJs, a spot of Guilty Pleasures and a healthy dose of our now infamous The Workman’s Club Karaoke. Add in the fact that we’ve got ice cold drinks and piping hot, piled-high-with-delicious-toppings WOWBURGER and we’re twirling our hair flirtatiously and asking ‘Sure where else would ya be going?’

OK, so here’s what we’ve got in store for you. Live from 8pm we’ve got 3 brilliant music acts to get you going. First up, Daniel John Paxton will be bringing you his own twist on indie/Americana/ alt-folk with a gorgeous helping of reverb and some beautiful harmonies. This Dublin singer-songwriter and multi-instrumentalist was the lead singer with folk rock band Buffalo Sunn – and also a member of The Brothers Movement and Mainline. We are excited to catch him for his first performance on a solo tip – we know you’re gonna love it!

Finally, set your faces to stunned for the awesome This Other Kingdom! TOK are Del Kerton (vocals, keys), Declan Dunne (guitar,vocals) andGit Sweeney (drums). Dublin’s finest psychedelic outfit offer an intriguing combination of neo-psychedelia with splashes of garage rock. The band released their latest album Rêveur on UK Label Wrong Way Records in April of this year on translucent orange vinyl with purple splatter, CD and download. Their debut LP Telescopic was released to critical acclaim in 2013; reaching the Top 10 in the iTunes and Irish chart.

So, what happens when the live music ends? We’ve loads more up our August Banker Sleeve ™ The Workman’s Karaoke Club and First Floor 80’s, 90’s and Noughties Guilty Pleasures and check out more alternative tunes, psych sounds, Manchester music and indie classics than you can shake a maraca at in the 9 bar with the most debonaire DJ, Trev (Workman’s Saturdays / Somewhere?) 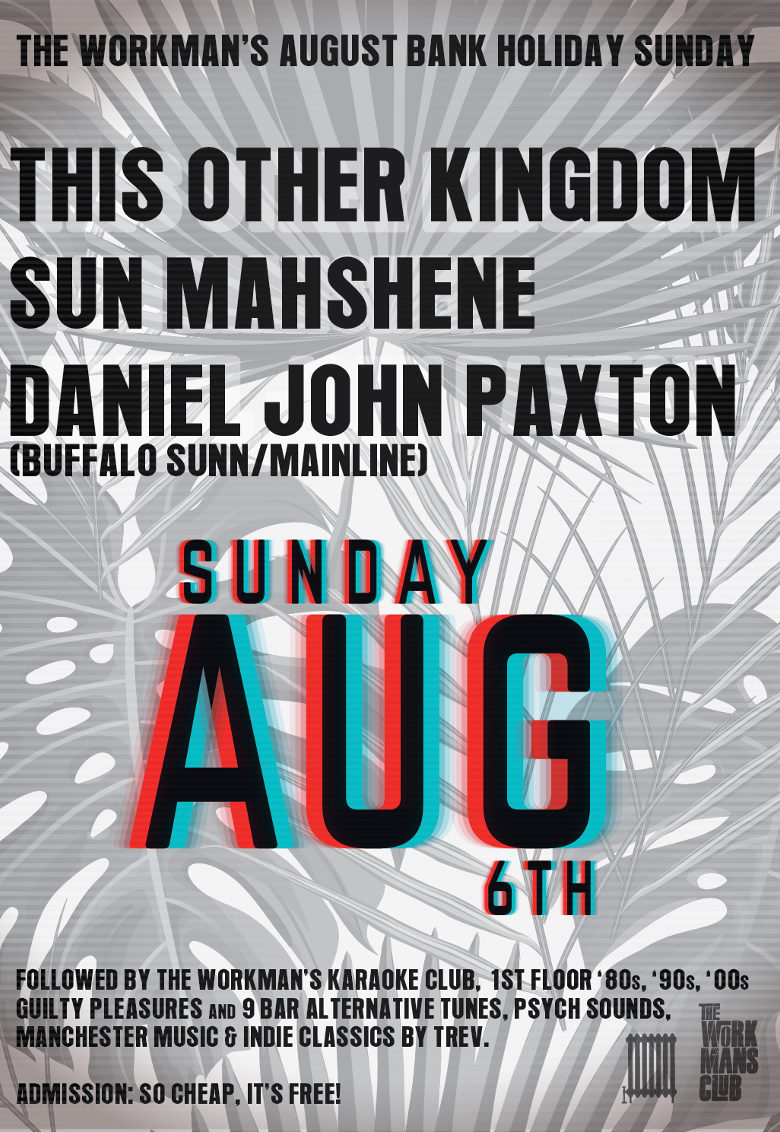