THE ‘WELCOME TO AUGUST’ BANKER

You all know the scoop by now. We’re fond of an aul banker at The Workman’s Club. We like to pull out all the music stops and set up a DEADLY night of craic to make sure you get the most out of having a Monday off. You also know that we charge zero euros to get in. So, for the princely sum of NO MONEY you can come along and enjoy some brilliant live music, somesuper-sound DJs, the mad-ball-of-fun that is The Workman’s Karaoke. Plus, WOWBURGER are on hand to serve up the juiciest, best goddamn burgers in town, too. What’s not to like?

So, kicking off our live music feast of a Sunday is Dublin 3 piece HUNTER. These lads deliver frantic and powerful live shows since their inception, and they do not appear to be slowing down any time soon! Their music demands your attention and draws you right in. Feel what they feel and get into it! You won’t forget it.

Next up, The Dyatonics. This 5 piece noise rock/post rock band hail from Dublin. Praised for their high energy and engaging performances, they describe their sound as ‘ballsy riffs and punchy ass chords (and the occasional unidentifiable noise sprouting from Malone’s pedalboard)’ They describe their stage performance style as ‘jumping around like a couple of ferrets on some next level uppers.’ As giant fans of awesome live music, ballsy riffs and ferrets, we are mega-psyched to catch the lads live at ours. You should be too!

Finishing up the live music portion of the night, ladies and gentlemen, we present The Fontaines! A rapid quintet from Dublin’s fair city, these lads are influenced by 80’s British alternative and rock n’ roll. John Robb (Louder Than War) said they ‘have created a rock n roll so pure and thrilling that it sounds like a breath of fresh air.’

Just cause the live music stops doesn’t mean the party will! In The Main Room we’ve got The Workman’s Karaoke Club. You know the phrase ‘the most fun you can have with your clothes on’? Well, we don’t even mind if you’re in the nip, either way you’ll have a MEGA time at our karaoke. The host is hilarious, the tunes are massive and everyone is up for it.

Upstairs in the No. 9 Bar we’ve got the magnificent Trev (Workman’s Saturdays/ Somewhere) and some special guests spinning ALL VINYL, All Alternative sounds. NICE. If Guilty Pleasures are your guilty pleasure then let the wondrous Colin Devine and Edward Porter treat you to their 80s, 90s and 00s Guilty Pleasures tunes. 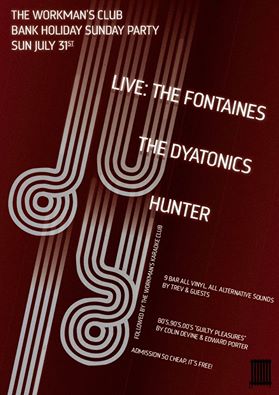