Dublin, Ireland: On Sunday, 5 March, traditional Irish musicians in Dublin and throughout the United States will participate in Sanctuary Sessions: Trad Music for Civil Rights, a collective action to support the protection and preservation of individual rights that are perceived to be under threat from the current presidential administration in the US.  On that day, musicians will come together in several cities and towns across the US and Ireland to make music, encourage positive dialogue, and raise money for the American Civil Liberties Union’s (ACLU) continued efforts to defend constitutional rights.

Sanctuary Sessions: Trad Music for Civil Rights is being organised by members of Boston’s Irish music community out of a shared frustration over the apparent disregard demonstrated by the current US president and his administration for social dignity, collective responsibility, women’s rights, immigrants’ rights, LGBT rights, a fair minimum wage, and related social issues.  These musicians reached out to the broader traditional music community and found a large number of musicians around the US and Ireland who share these frustrations and who agreed to participate by holding fundraisers in their home communities.  In addition to the event planned at the Workmans Club in Dublin, there are events planned in Boston,  Martha’s Vineyard, New York City, Chicago, Philadelphia, Los Angeles, San Francisco, Portland, South Bend, Portland, Montpellier, VT, Baltimore, St. Louis, Cincinnati, Charlottesville, VA, and Asheville, NC.

Immigration and cultural exchange between Ireland and the US has shaped the history of Irish traditional music enormously.  Several of the musicians who will feature in the benefit concert at the Workmans Club in Dublin are US-born, and several others have resided in the US and toured there as professional musicians.  They are committed to supporting the important work of the ACLU in defending civil rights and hope that their music will inspire a message of love, solidarity, and peace.

Sanctuary Sessions: Dublin will take place on Sunday 5 March from 7-10pm at the Workman’s Club, 10 Wellington Quay, Dublin.  Suggested donation is €10.  A complete listing of Sanctuary Sessions: Trad Music for Civil Rights events can be found on Facebook at www.facebook.com/pg/SanctuarySessionsForACLU.  Please see poster for list of musicians involved in the Dublin event. 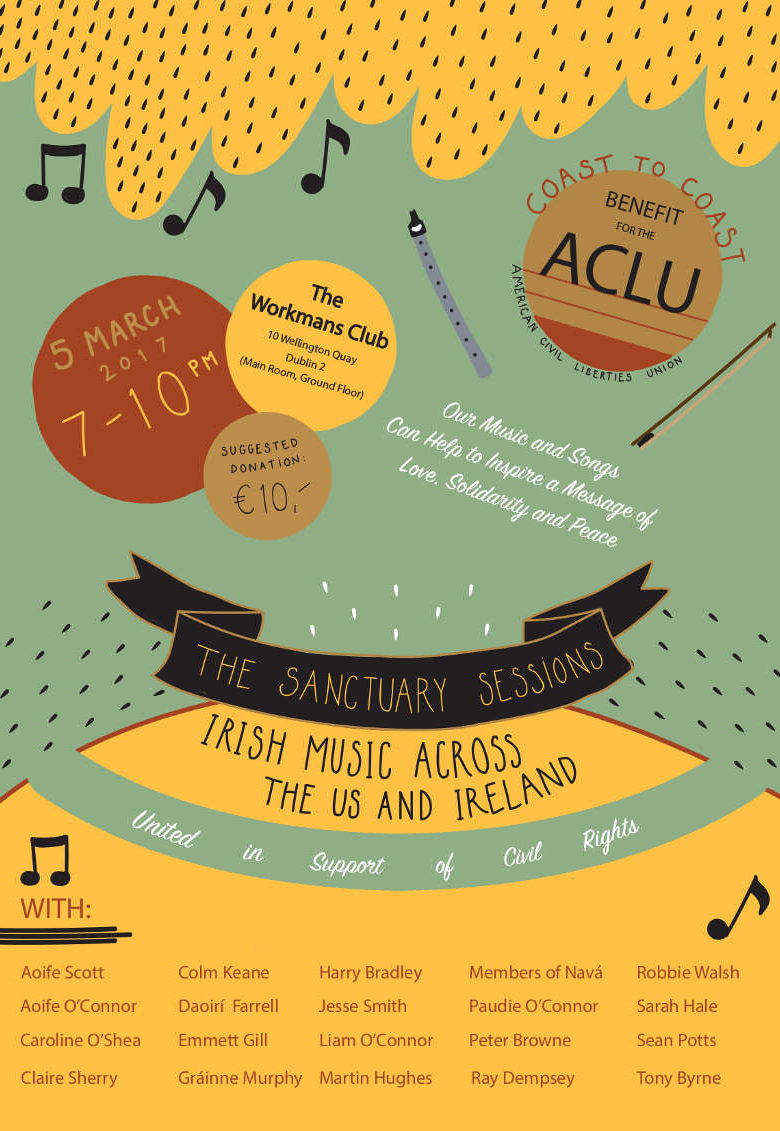