Crowned at “One’s to Watch for 2019” in Vogue Magazine, Kara exploded onto the scene this year with a combined 15 million combined streams to date. Kara was placed on various playlists, This Is How We Do, New Music Friday and Viral 50 on Spotify, A-list: R&B, Breaking R&B, Best of the week and One To Watch 2019 & Weekly One in January 2019.

Kara is a true performer and we can’t wait to welcome her back to Dublin again!

In a short space of time, KARA MARNI has played as special guest to many chart-topping artists such as Lewis Capaldi, Picture This and Rita Ora.

Marni has now announced a headliner performance of her own, at Dublin’s Workman’s Club on March 29th

Widely tipped as one of the UK’s hottest new prospects and racking up a combined total over 15m+ between Spotify, Apple and Amazon Music, Kara Marni is a true performer with an incredibly special voice, and we can’t wait for her to return to Dublin. 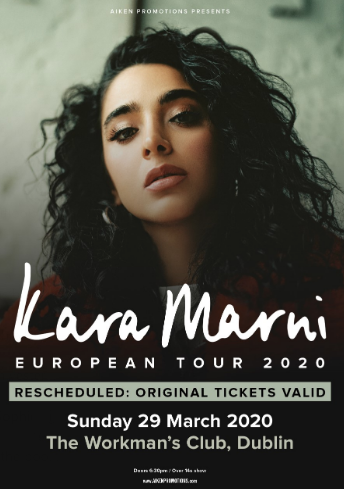