Aiken Promotions today, announced a reschedule date for BC Camplight live at The Workman’s Club. The show was cancelled on 27th October due to the loss of his voice. The new date will be on 3rd March 2019. Tickets €16 includes booking fee, go on sale this Friday at 10AM. Tickets from his original date of 27th October 2018 are still valid for 3rd March 2019 show.

Born in New Jersey, but living in Philadelphia, Christinzio had released two albums while battling addiction and mental illness. Both albums won rave reviews and earned Christinzio a reputation as one of independent music’s most forward-thinking artists. Soon after, however, as illness rendered him unable to function as a working songwriter, Christinzio retreated to a life squatting in an abandoned church.

Despite some notable appearances as a session pianist (Sharon Van Etten) and occasional live work for Philly faves The War On Drugs (Robbie Bennett and David Hartley were in the original BC live band) he knew a sea change was needed in order to regain his career and sanity.

Feeling he’d be “dead or in jail if I stayed,” he acted on a friend’s suggestion to cross the ocean to Manchester. There, Christinzio found new inspiration, new friends, a girlfriend, a dog, and finally a new album (his first in eight years).

So, imagine his mood when he fell foul of UK immigration. “I’d had such high hopes for How To Die In The North, and I was told I was being deported two days after it came out, and banned from the UK. The next thing I know, I’m playing Pac Man in my parents’ basement, thinking, this is my life now.”

Occasional gigs in Europe, where his Manchester-based band could meet him, and extended sojourns in Dublin and Paris, broke up the monotony, but it was still “living in a constant panic attack.”

But then the cavalry arrived! Courtesy of his grandparents, Christinzio secured Italian citizenship. It cost time, money and a portion of his sanity, “but after a year and a half I could finally shove my Italian papers in their faces at the airport and return to sunny Manchester. The thing is, despite being American, I feel Mancunian, and I couldn’t think about making another record, until I got back.”

To add insult to injury, “Brexit happened, like a day after I got back. Can I get a fucking break here, please?”

Once the dust had settled, Christinzio realised, “I didn’t feel any better, I had so much anger, I felt destroyed. The demons were back and had lost me friends, I’d drunk too much, and I felt nothing but dread and disease. I thought, I can’t wait to hear what this next album is going to sound like.”

Recording in Liverpool’s Whitewood studios, Christinzio locked himself in the windowless studio and recorded almost exclusively in the dark. “The thoughts and sounds that began to flow out of me were pretty scary. I’m pretty sure the engineer started carrying a shiv in his pocket after about the 2nd day. Nothing playful sounding came out. If the last album had elements of whimsy, the thought of any on this album made me want to vomit.”

“A couple of months later we had finished Deportation Blues and emerged from the studio like mole-people”. Christinzio recorded the album mostly on his own, plus drummer Adam Dawson, occasional guitar by Robbie Rush, and a couple of session horn players. The lead track is ‘I’m Desperate’, “an ominous synth burner,” says Christinzio, with a Suicide-style throb and a haunting female vocal counterpoint that underlines the album’s manic, careering edge, fantastic hooks and instrumental verve.

Deportation Blues is also noticeably more electronic than its predecessor. “I was feeling cold so every time something sounded pretty, I replaced it with something that sounded like an ice pick. The apocalyptic nuclear feel really appealed.”

Throughout, Christinzio sounds as if he’s walking a knife-edge. Take second track ‘I’m In A Weird Place Now’, a heady conflagration of Spector and Springsteen, with Christinzio confessing “And there’s something about Manchester town / And the silly little things she makes me do.” “I like the oppressiveness of the weather in Manchester, it brings everyone down to my level” he explains.

The fried mood continues on ‘Hell Or Pennsylvania’, splicing woozy noir jazz lounge-drunk cabaret by way of ‘50s legend Jerry Lee Lewis – Christinzio’s entry point to music through his mother’s record collection. “It’s the first time I’ve reflected that on a record,” he says. “Jerry Lee was this guy bashing at a piano who didn’t give a shit, and I didn’t give a shit.” The lyrical reference to “lemon twirls” meanwhile, represents Brian’s struggle with substance abuse: “The big choruses are a celebration of cocaine whilst the jazz sections represent the lament, the familiar loathsome aftermath.”

The sudden changes of mood and style are also metaphorical. For example, ‘Am I Dead’ embraces cinematic horns, broody pop and synth-bass afro-funk. “I go through highs and lows and have trouble staying entertained,” he admits. “A musical part can state its purpose in fifteen seconds, sometimes it doesn’t need repeating. The trick is tying everything together without it sounding confusing.”

‘Am I Dead’ is segued between ‘When I Think Of My Dog’ and ‘Midnight Ease’, two plush, heart-aching piano ballads with rippling saxophone. After ‘Fire In England’, a greasy, nervy rocker, is a bitter ode to British PM – and former immigration controller (as Home Secretary) Theresa May (“dresses like a bus seat, doesn’t she?”). It’s a complex, bleak record I guess” Christinzio concludes. “As dramatic as it may sound, this album was made by a dude who wasn’t sure he’d be alive the next day. Nothing is there for any other reason than it’s the truth. It’s not trying to sound cool or get on the radio.”

Though Christinzio points out “this is no redemption I-saw-the-light story,” he is allowing himself a little bit of hope for once: “I’ve never been as pleased with where I am artistically as I am right now.”

On top, his new band, “is phenomenal.” Alongside trusted drummer Dawson is Luke Barton (guitars, synths), guitarist Tom Rothery and multi-instrumentalist/ backing singer Ali Bell. Leading them is a man that a bartender in Manchester recently described as, “like Mozart and Tony Soprano had a kid.” Brian Christinzio, and BC Camplight, genius and pain, may be here to stay at last.

BC Camplight live at The Workman’s Club 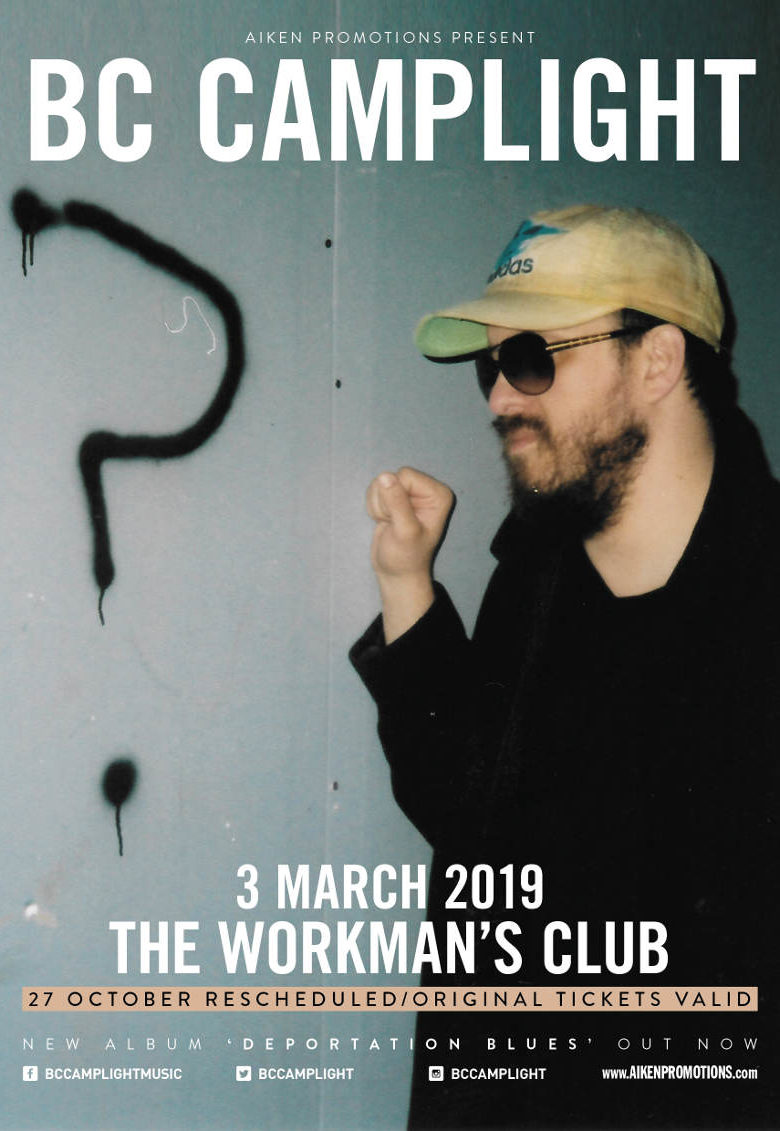