This Saturday Childhood & Blue Hawaii take over The Workman’s Club for a very special double-headliner. Due to unforeseen circumstances special guests Sorry will no longer be opening the show.

CHILDHOOD:  Childhood’s critically acclaimed second album, ‘Universal High’ was recorded at Maze Studios, Atlanta across the summer of 2016 where the band decamped for a month. ‘Universal High’ was produced by the legendary Ben H Allen III (Gnarls Barkley, Animal Collective, Deerhunter) who struck up quite the creative partnership with Ben. You could be forgiven for branding ‘Universal High’ a rebirth. In places almost unrecognizable from the dub-charged psychedelic indie of their debut, the new sound swells from the southern streets in which it came to life, caked in the Seventies soul of The Isley Brothers, Curtis Mayfield and Shuggie Otis.

Ben says, “’Universal High’ represents many things to us as a band. It signifies change, both musically and mentally whilst also revisiting influences that confounded our interest in music in the first place. What I think is noticeable is the direct nature of the songs and its influences. Being surrounded by soul music, classic pop songs and music with any form of groove all my life, these influences began to speak for themselves within these new songs we were writing”.

BLUE HAWAII: Blue Hawaii is the song-writing, production, and DJ project of Raphaelle ‘Ra’ Standell and Alexander ‘Agor’ Kerby. After some four years apart, the duo rekindled their creative ﬂame in 2016 and begun writing music about an intimate relationship Ra was experiencing mostly over instant messaging, sparking ideas about the meaning of closeness in our highly connected world.

Tenderness is a concept album which brings forth the challenges of handling relationships online. Maintaining closeness over distance, real vs. virtual tenderness and accountability are important themes in the album’s progression. It unfolds like a play and each song being supported by shorter interlude pieces: skits, phone calls, acoustic demos, real life samples and quiet left-turns.  The album draws upon inﬂuence from 90’s dance tracks and deep disco cuts, often mixed with Ra’s acoustic guitar playing.

Tickets are on sale now through www.ticketmaster.ie & usual outlets nationwide. 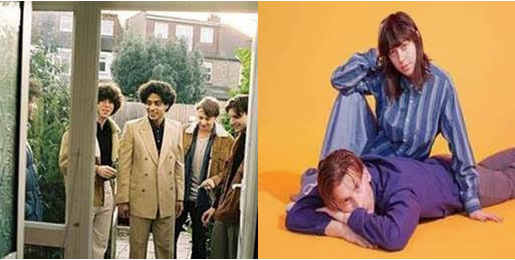