Dream Wife is out January 26th 2018 via Lucky Number

“Dream Wife is a perfect example of what makes SXSW special, the discovery and excitement of seeing something real that has feeling and meat to it, and makes you grateful you were there to witness it.” – NPR Music

“Dream Wife‘s most recent singles are two of the most urgent, empowering, and subversive rock jams of 2017” – Gorilla vs. Bear

“a well-oiled machine worthy of the Strokes but performed with the righteous indignation of Bikini Kill…snappy, punk-informed rock ‘n’ roll.” – Stereogum

Dream Wife just announced their long-awaited self-titled debut album, and today they share a striking music video for the record’s first single. “Let’s Make Out,” the band’s celebratory ode to femme sexuality and consent, was directed by the bands frequent collaboratorAidan Zamiri and sees the Wives hosting their very own prom. Grab your date and head to prom with Dream Wife now. Dream Wifeexplains the video:

“Let’s Make Out is a lighthearted celebration of sexuality. Women are and have a right to be sexual beings. The video is silly, hedonistic and really fun. There is no shame in sexuality, there is no shame in fun. But remember; consent is key. Proms are synonymous with coming of age, a necessary social before graduation. We threw an irl (in real life) prom at our recent London show to announce our album and the night ended with much of the cast from the video making out and dancing with us on stage. Prom in many ways represents us coming of age as a band and we’re hoping to usher in this new era; dancing, making out, making things with our friends and flipping the script every step of the way.”

Renowned for their ferocious live show, the band are also excited to announce a UK and European tour, which includes a date for The Workman’s Club, Dublin on 25th March 2018.

Dream Wife will be released on January 26th, 2018 via Lucky Number. Pre-order on Vinyl/CD here or Digitally here. 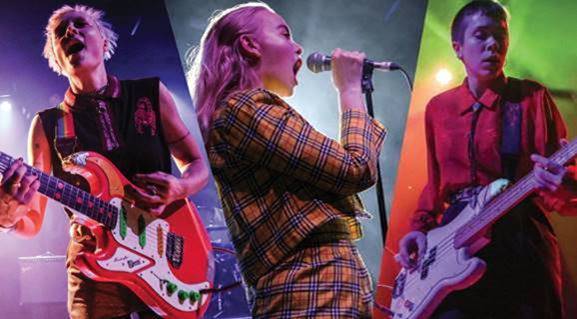