The Rifles are back and have announced a date for The Workman’s Club, Dublin next summer as part of their Unplugged Tour 2017.

Two years and six months ago when their fourth album arrived, the band spoke of how – after the more serene, lush, different sounding ‘Freedom Run’ (2011) – they had “started to miss that original Rifles sound a lot”: hence the inclusion of a clutch of new tunes in what you might term the classic mould. But looking back at that record, even with that mindset, ‘None The Wiser’ was also full of adventure, evident in the likes of ‘You Win Some’ and the closing eight minute epic ‘Under And Over’. Even when they are going back to basics, it seems, The Rifles can’t help but move forward.

And that is very much the spirit in which The Rifles are continuing, and in which their new record is anchored. You only have to glance at the tracklist to notice this. Because in an era in which we are repeatedly told that the album is dying, ‘Big Life’ is a not just an album, but a double album of four sides and eighteen songs. And the reason for this is simple.

“It was just a case of having trouble picking the eleven or twelve songs for the album,“ says lead singer, guitarist, sometimes bassist/pianist and songwriter-in-chief Joel Stoker. “There wasn’t really any we wanted to leave off. So we decided to just throw them all on. It’s just a case of giving our fans as much music as possible.”

This is key. There can’t be many other bands in the UK with as fervent a fanbase as The Rifles. They can still play, 12 years after they formed, to thousands of people in plenty of towns all over the country. They’re still not on the radio, they’re still not all over magazines, and yet they continue to be more adored than many other younger bands who are. And it is the trust that their audience has in them which inspires them to do things like ‘Big Life’: an expansive, incredibly varied record – or two records – that is the sound of a band at the absolute peak of their creativity.

“I would say there’s quite a bit of different stuff on this one,” says Joel. “But it wasn’t something we ever discussed in that way. We just write, and what comes out comes out. I don’t think we ever go too far out there: and always at the core of it there’s a strong melody. And to me that’s the most important thing.”

Amongst the long term fans who have facilitated The Rifles still being around is one very famous one: Mr Paul Weller. His influence on their music has been evident from their very first songs, and he has been an amazing mentor and sometime collaborator, but he has also long helped out the band in more practical ways, with ‘Big Life’ being no exception. “He very kindly helped us out with studio time with (producer) Charles Rees, at Black Barn studios,” says Joel. “We recorded it all there. It’s hard to put a time frame on it all, as it was a couple of days here and there over quite a long period – probably not that long when you piece it all together. So I have no idea in which order we recorded all the songs in – it seems like ages ago when we started!”

The luxury of this setup, of not being up against a clock on the wall or a deadline, is what has allowed The Rifles to take their time crafting so many songs, and to spend time adding little touches that make them sparkle. It’s hard to think of a band more operating on their own terms, more outside of any sphere of influence, and more still alive than the Rifles do on ‘Big Life’. And that is their own, unique triumph. 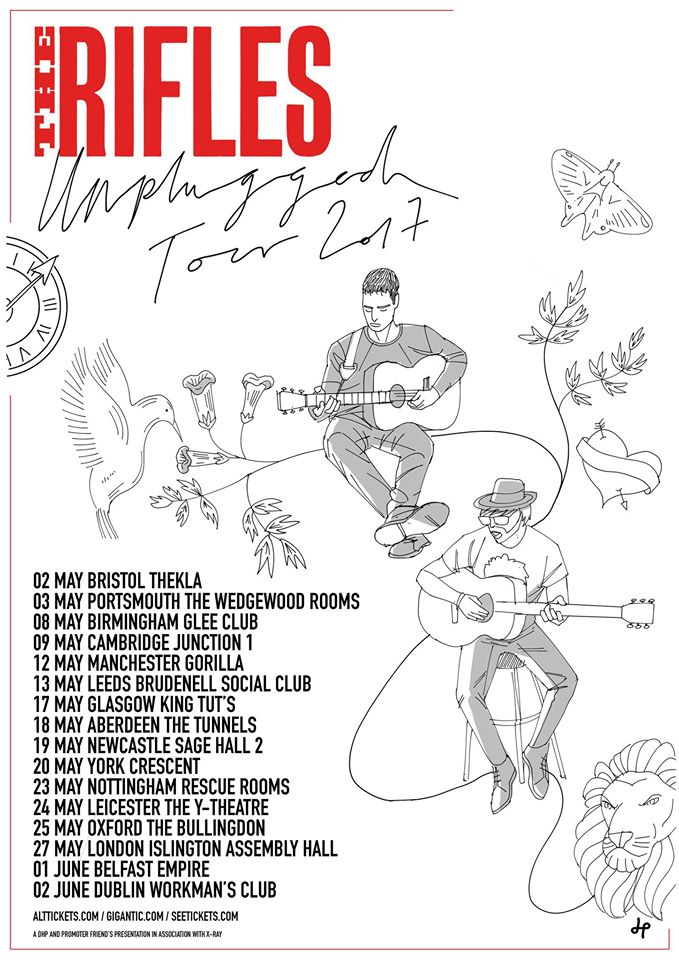