Having blazed a trail with a fistful of well received singles and a compelling live show, Otzeki herald the release of their debut album with new single ‘Pay The Tax’.

‘Pay The Tax’ is taken from Binary Childhood, Otzeki’s debut album set for release on April 13th.  Although their name, a combination of letters that didn’t exist on Google until they came up with it, Otzeki is the intersection where Mike Sharp (vocal, guitar) and Joel Roberts (keys, Ableton) interests meet in their mutual enthusiasm for electronic music.

The album title, ‘Binary Childhood’, is a multilayered dissertation on the internet, introversion, constant online self-expression, and the struggle between our co-existing private and public personas.  Otzeki explain: “We believe we’re a part of a generation that’s been raised as binary children, programmed by a series of ups and downs. Slowly but surely we became enveloped in data, our own personalities were translated into online forms before we really knew who we were.”

Lead single ‘Pay The Tax’ imagines “an algorithm is the establishment” and references the leaked Paradise Papers and the injustice of a system that serves itself rather than the people it’s supposed to.

‘Binary Childhood’ is an album driven by rhythm, that takes their previous use of electronic loops and infuses them with more organic sounds and live percussion. An exercise in the dark arts of electronic music, ‘Binary Childhood’ delivers a kind of controlled raving that’s served with a side-order of something subtly sinister and, despite their insistence that they’re not academically inclined individuals, is packed with cerebral songwriting.

To coincide with Binary Childhood’s release the duo embark on an extensive European tour including a date for The Workmans Club, Dublin on May 8th proceeded by dates at SXSW.

Tickets priced €15 go on sale this Friday 16th February at 9am through www.ticketmaster.ie & usual outlets nationwide. 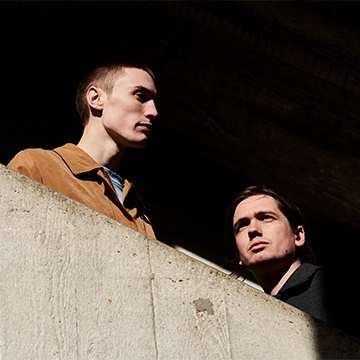