The Ben Miller Band’s frenetic, one-of-a-kind jaw-dropping live show has astounded audiences across North America and Europe and today they have announced their return to The Workman’s Club, Dublin this September.

The Ben Miller Band revamped their line-up, expanding to a foursome following the departure of founding member Doug Dicharry. Multi-instrumentalists Smilin’ Bob Lewis and Rachel Ammons have officially joined the band where they bring an arsenal of instruments to the fold including fiddle, slide guitar, dobro, dulcimer, keyboards, mandolin, banjo, bass and harmonica and in Ammon’s case, an electric cactus, and inject the band with a whole new, exciting dynamic. ‘’When we thought of what the future might bring and how to fill the shoes left by Doug’s departure, my very first thought was of one of my favorite bands in the world, Tyrannosaurus Chicken,” says Ben Miller. “Smilin’ Bob and Rachel are two of the most gifted musicians I have ever met and, in my opinion, they make some of the most original and authentic American music being made today. Over the years, we have shared stages many times with them and jammed together every chance we had. There was always a strange and wonderful alchemy that came from our two groups mixing, it felt effortless and right. So, we called them with our idea of joining forces. After some careful deliberation we all came to the conclusion that the potential was so far off the charts that if we didn’t do it we’d probably always wonder what might have been. This is a very big step forward for all involved and we wouldn’t be doing it if we didn’t fully believe that what we have put together is a very, very special band. So, here’s to the future, 2016 is gonna be a big one.”

The Ben Miller Band has not stopped touring since the August 2014 release of their acclaimed sophomore album, Any Way, Shape Or Form. In addition to a slew of festivals they became ZZ Top’s go-to opening act and have opened for the blues rock giants all across the U.S. and Europe. Produced by Vance Powell (Jack White, Wanda Jackson, Kings of Leon), Any Way, Shape Or Form, is an exhilarating listen that’s garnered the band considerable praise and has raised the their profile from grassroots DIY group to internationally touring sensation. 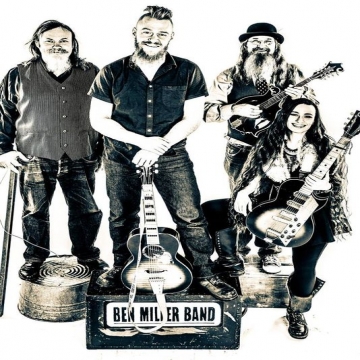