London-based Ulrika Spacek have announced a date for The Workman’s Club, Dublin this October in support of their latest album Modern English Decoration.

“A living room doesn’t give much natural reverb, and it’s not in our interest to artificially construct it”

Ulrika Spacek returned on June 2nd with the release of their second album, Modern English Decoration. Much like their debut album released in early 2016, the band chose to record, produce and mix the entirety of the record in their shared house – a former art gallery called ‘KEN’, so named because of a cryptic inscription found above the front door. Not just a studio and home, KEN is essentially the band’s hub, a space in which the surrounding ephemera of videos, artwork and even band photos are all created.

The relatively short amount of time between their first and second albums is testament to the band’s self-contained creative environment and the productivity it encourages. There’s a tendency to label this degree of self-reliant creativity ‘DIY’ – and the band do certainly feel emboldened by that ethos – yet to consider Modern English Decoration solely in these terms is a disservice. Their craft is considered and purposeful, the means of its production reflecting the band’s overall vision rather than the value system of an often haphazard and accidental DIY culture. “We enjoy listening to music through the album format and want our records to reflect that”, says Rhys Edwards (guitars, vocals, synthesiser). “Though we may explore this in the future, our records are not ‘jam’ records. We’re fans of collage based art, and create music in the same way“

Ulrika Spacek formed in Berlin in one night, when 14-year-long friends Rhys Edwards and Rhys Williams conceptualised ‘Ulrika Spacek’ and came up with The Album Paranoia as their debut album title. Moving back to London with the intention to record it, they were joined by Joseph Stone (guitars, organ, synths, violin), Ben White (bass) and Callum Brown (drums, percussion), ossifying into the five-piece they are now. The album was released soon after with little forewarning but no little fanfare, and was accompanied by a yearlong, near-monthly club night called Oysterland that the band both curated and performed at. Less than 18 months later, the follow up arrives eerily fully formed, somewhat inevitably according to Edwards: “We started making this record as soon as we finished our first. Like our debut, we started with Track One on the album and went from there. Making a batch of songs then ordering them after they’re all finished isn’t something we have much interest in.”. Shirking the temptations to write ten three-minute singles, a more open and expansive style is preferred. Writing and arranging as they go, the intention is to let the material find its own place in the set, all the while retaining a sense of direction that avoids the pitfalls of self-indulgence.

Given the lyrics often favour abstraction and the vocals can be more impressionistic than declarative, the album title itself offers perhaps the most telling entry point to the record. In part, it’s a self-effacing play on an interior design cliché that references the meticulous creative processes the band adheres to. There’s also a nod towards the environment in which it was created – a Victorian house turned art gallery turned home studio. “This record was made in various rooms in our house, predominantly in the living room. Every part of the album reflects this, from the title to the setting of the lyrics. Doing everything ourselves is not just necessary: it’s important to us, as it allows us to truly create our own world”. While there’s an element of domesticity to the album’s creation, the themes that drive the songs are anything but, reflecting an all-too-common sense of mid-twenties alienation and anxiety, alongside the comforts/burdens of self-awareness.

Unsurprisingly given the context of its creation, Modern English Decoration might be considered a companion piece of sorts to The Album Paranoia. But there are crucial differences. Most notably, this isn’t the work of the Ulrika Spacek conceptualised by Edwards and Williams in Berlin – Modern English Decoration is the band as five rather than two people, and it shows. Those who have witnessed the intensity of their live show will instantly recognise the merits in this. The bass and drums provide a versatile anchor, at once soft, then aggressive, while the vocals drift woozily in and out, like druggy hindsight or skewed premonition. With three guitarists in the band guitars were always going to be central to the music, but what is less expected is the dynamic interplay between the trio that suggests a three-headed version of the Verlaine-Lloyd axis at the heart of Television. What’s more, the absence of reverb is integral, in part attributable to the ambience of the studio, but also a conscious decision in order to add focus. And focus is the abiding term: this is an album designed to be just so – a 45 minute commitment, a surrender. 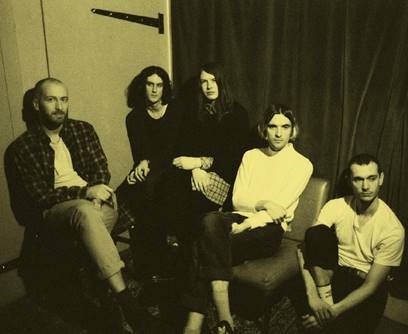