With Support from Maul Park and Paul O’Toole plus special guest Gillian Hamill – Alternative singer-songwriter Liam Oragh brings his new album – The Arguments against Insanity – which includes the singles Oblivious and Lake Louise – on tour for a hometown gig in The Workman’s Club, Dublin on Friday March 2nd – the follow up to his Jackie Hayden Hot Press Pick-of-the-Fortnight Award-Winning Debut album – Only 2 late if You’re dead – and best known for his catchy quirky song ‘Hey Nelson’ about wanting to inherit Nelson Mandela’s shirt collection.
Liam Oragh – Arguments against Insanity Winter into Spring Tour

“The album sees Liam Oragh alternately channeling the musical stylings of Jonathan Richman, John Cale, Lou Reed et al with his own inimitable aplomb. The album is infused with humour, hints of punkiness, shades of Americana and just plain musical goodness despite the darkness contained within the lyrics. If you like your singer-songwriters quirky then Liam Oragh is yer man.”
Ralph’s Life Indie Music Blog and Radio KC Indie Show.

“Two brothers – Paul and Mark Byrne from Dublin, took their first names, reversed the first letters and Maul Park was born – simple, effective and striking – their music a breath of fresh air; with harmonies hewn from the Beachboys and melodies effortlessly cut from the Beatles – these boys wear their influences upon their sleeves with pride, aplomb and irresistible charm”
Blog de los Muertos – Blog of the Dead

“I still haven’t worked out if Paul O’Toole aka Scarecrow is a folk singer who likes to protest or a protest singer who doesn’t give a folk – either way he’s a powerful singer-songwriter who passionately believes that even one song has the power to change the world – and who are we to argue with him.”
Blog de los Muertos – Blog of the Dead

The Vintage Room – 8pm
Upstairs in The Workman’s Club 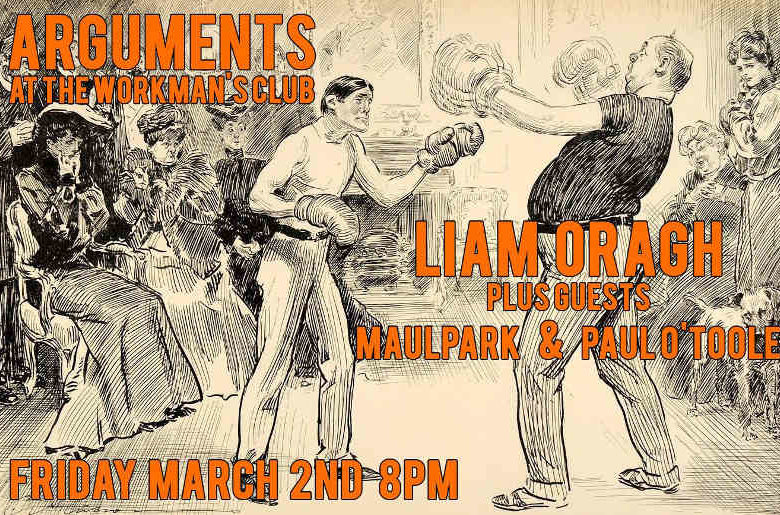