What happens when you take a host of faces from the TV and radio not normally associated with Improv comedy and give them a crash course in Improvisation before putting them onstage in front of a live audience for the first time?  Find out in his daring show in aid of Our Lady’s Children’s Hospital, Crumlin!

Now in its third year, Improv Fest Ireland brings its Celebrity Comedy Improv Show to the Workman’s for an evening of unscripted and unpredictable comedy where no one knows what will happen next.  Improv/Improvisation is an art form where actors and performers create scenes, stories and characters in the moment live in front of an audience.  There is no script, no planning and no safety net!

This year we have a very exciting line up of brave souls performing improv as an ensemble together for the very first time!

Also joining the line up is veteran improviser from L.A. Nick Armstrong.  Nick is also a writer and actor who has had roles in Grey’s Anatomy, Parks & Recreation, The Office (US) and Jimmy Kimmel Live. 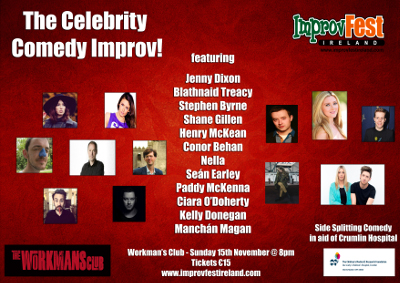