After stunning performances supporting Mogwai at The Cork Opera House and Dublins Olympia in June, RM Hubbert makes a welcome return to The Vintage Room at The Workman’s Club on Aug 14th.

RM HUBBERT is a guitarist from Glasgow in Scotland. He writes music about love, death, friendship, mental illness and occasionally a dog called D Bone. It’s not as depressing as the previous sentence suggests.

One of Glasgow’s more prolific artists, RM Hubbert has released music under a variety of guises since 1993. It was EL HOMBRE TRAJEADO’s triptych of albums released between 1995 and 2005 though, that really put Hubbert on the musical map, earning swathes of critical acclaim, three Peel Sessions and support slots with the likes of Sebadoh, Tortoise, Nick Cave, Deerhoof, Mùm, Mike Watt and The Delgados. Following El Hombre Trajeado’s demise, guitarist Hubbert took a break from playing live and began studying a host of different musical forms before returning to the scene in 2008 and self releasing his debut solo album ‘First & Last’, in March 2010. This album was later re- released on Scotland’s legendary Chemikal Underground Records in February 2011. The album’s nine instrumentals skilfully blended elements of flamenco and samba with contemporary melodies to create a truly unique, understated record.

‘First & Last’, by Hubbert’s own admission, was informed by three dark events in his life; the death of his father; his diagnosis with chronic depression and finally, the death of his mother. That these traumatic events resulted in album of such beauty is testament not only to Hubbert’s technical prowess as a guitarist but, perhaps more importantly, his considered and subtle strengths as a composer. With ‘First & Last’ and a return to regular live performance, RM Hubbert’s profile grew steadily as he averaged over ninety shows a year and garnered support slots with Thee Silver Mt. Zion Memorial Orchestra Band, Godspeed You! Black Emperor, King Creosote and Alasdair Roberts as well securing the main support slot on both Mogwai’s mammoth European tour, Bill Wells & Aidan Moffat’s UK and European tour and The Twilight Sad’s UK tour.

The second album, ‘Thirteen Lost & Found’ was released through Chemikal Underground Records on January 30th 2012. Produced by long-time friend Alex Kapranos (Franz Ferdinand) the album features collaborations with some very special artists including Hanna Tuulikki (Nalle, Two Wings), Emma Pollock (The Delgados), Luke Sutherland (Long Fin Killie, Bows, Mogwai), Aidan Moffat (Arab Strap), Alex Kapranos and Alasdair Roberts amongst others. Having found that it was easier to connect with people through music, ‘Thirteen Lost & Found’ was conceived by Hubbert as a way of reacquainting himself with old friends while making some new ones. Each piece was written collaboratively with the respective artists; with the emphasis placed on spontaneity and experimentation. The resulting collection is eclectic and beautiful: voice, percussion, violin, piano, banjo, accordion, vibraphone and gu zheng all joining Hubbert’s idiosyncratic guitar over the eleven songs.

Thirteen Lost & Found has since won the 2013 Scottish Album of the Year Award.

‘Breaks & Bone’, his third album for Chemikal Underground (released 27/09/13), sees Hubbert return to solo guitar performance, albeit augmented for the first time with his own vocals. Conceived as an end to the ‘The Ampersand Trilogy’, Breaks & Bone explores the ideas of letting go of grief, accepting depression and finding new love. The album alternates between instrumental and vocal tracks, tied together beautifully by Paul Savages haunting, minimalist production.

This album also a return to the live stage after a 9 month break for Hubbert for a highly successful UK tour playing to his largest audiences yet including sold out crowds in Glasgow, Manchester, London & Bristol. 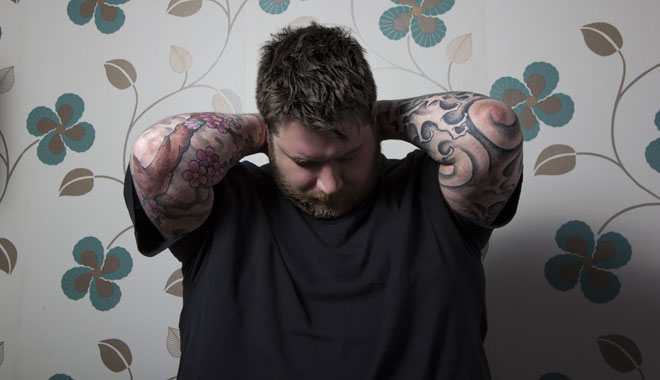