Dolittle are thrilled to introduce a new series of shows to The Workman’s Club, which will focus on the awesome, burgeoning Irish music scene. Each show will feature 3 Irish artists, brought together for a triple headliner. The first of the series will kick off with the mighty Slow Place Like Home, Carriages and Bantum on Friday, 8 July. Triple talent, triple threat, triple craic!

‘Slow Place Like Home’ is the brainchild of producer/musician Keith Mannion. Based in the forests of Donegal, in the North-West of Ireland, to date Mannion has released a series of EPs and his Debut Album ‘Romola’  to critical acclaim, his live set has been described by the BBC as “the sound of restful energy”.

Having appeared at major Irish festivals from Electric Picnic to Body & Soul, he has also shared stages with a multitude of national and international acts including, Squarepusher, Perfume Genius, Kate Boy, Moodoïd, Glass Animals, Ulrich Schnauss and Pantha Du Prince.

Slow Place Like Home is set to release a double A-side single on May 23rd 2016, it will be released exclusively on 10” vinyl and all digital formats and along with his live band he will be heading out on tour in support of this new release,

“New to me but simply beautiful” – Lauren Lavern, BBC Radio 6.

“Slow Place Like Home is a remarkably unique talent. Drifting wisps of electronics give way to sugar sweet pop melodies, all pieced together with an unerring strangeness. Real name Keith Mannion, the producer/musician’s semi-exile from cultural conduits has seemingly allowed him to do exactly as he pleases and it works!” – Clash Magazine.

Carriages  formed  in  2013  to  bring  together  Harry  Bookless’s sound beats and Aaron Page’s songwriting and vocals.

2015 saw Carriages taking a step back from the live front  to focus on recording new material and as a result released their third single ‘Like a Child’ in early 2016 the first of a number of new songs. Staring as a percussion loop recorded using flower pots and a garden sweeping brush ‘Like A Child’ became an experiment in stripping back the music and creating space to experiment with layered vocal harmonies. Lyrically the song deals with lost love and an inability to move on while the repeated falsetto hook captures the futility of longing for distant memories.

“ A mesmerizing return from Carriages, ‘Like a Child once again highlights the brilliance of the pair’s juxtaposed sound” – The Last Mix Tape Song of the Week

Alt. Electro act Bantum has been making a name for himself as one of the leading Irish electro acts over the last 6 years. Having already released 5 EPs in the space of 2 years Bantum went on to release the critically acclaimed “Legion” album in 2012, followed by a string of remixes for the likes of LeGalaxie, Come On Live Long and We Cut Corners to name a few. 2016 has seen a collaboration with Irish/Sierra Leonean vocalist Loah – “Take it” – get even more widespread acclaim in anticipation for the next release. Expect to hear some upcoming new material during his energetic live sets.

“We’ve an early contender for Irish Song of the Year!” – Hot Press Magazine

“This Cork-born, Dublin-based producer and DJ is a potential king of the hill when it comes to making slippery grooves with oodles of southern-fried electronic mojo. Thumbs up all round for his “Slide” cut. ” – Jim Carroll The Irish Times 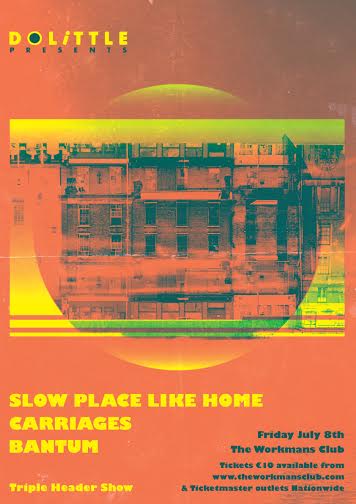