“EES are nothing short of awesome”  Brent Hinds (Mastodon)

This is Electric Eel Shock’s 22nd year and they are touring Europe supporting their first new album of completely new tracks for nearly 7 years. DO NOT MISS this amazing live band when they take to the stage at our place on Wednesday, 16 November.

Formed in Tokyo in the 90’s EES left their native Japan at the end of the millennium to see what they could make of America and the rest of the world. We are now 16 years into the 21st century and the band continue to tour the world playing to an ever increasing and loyal fanbase.

Electric Eel Shock have toured 33 countries around the world on 4 continents and performed at pretty much every major rock festival in Europe. Highlights include: Headlining a stage at the prestigious Roskilde Festival in Denmark and Bonnaroo, one of biggest US festivals, following The Black Crowes and closing the main stage at Azkenna Rock Festival in Spain, playing every state in America except Alaska and Hawaii, performing at SXSW 4 times and playing with a full orchestra at Beached Festival in Scarborough…

real fans will want to get hold of “SLAYERS BAY BLUES” and even the early live album “MAYBE I THINK WE CAN BEAT NIRVANA” Electric Eel Shock’s trio of crowd funded albums are “BEAT ME” (2005) “TRANSWORLD ULTRA ROCK” (2007) – both of which were both recorded in Holland with legendary producer Attie Bauw (Judas Priest, Scorpions etc) and “SUGOI INDEED” (2009). Having learnt so much from Attie in the studio and wanting to try that out themselves they self produced “SUGOI INDEED” in Japan, although Attie flew over to engineer the basic tracks and help out. Back in Japan for a while the band released “LIVE AROUND THE WORLD vol.1” (2011) and “BEST OF & COVERS” (2014) these again being crowd funded, this time by Fan-Bo,  a Japanese crowd funding site set up by the band themselves.

Every time that Electric Eel Shock have played our gaff it has been BRILLIANT. Get yer tickets and get ready for an amazing night of series tunes and deadly atmosphere. 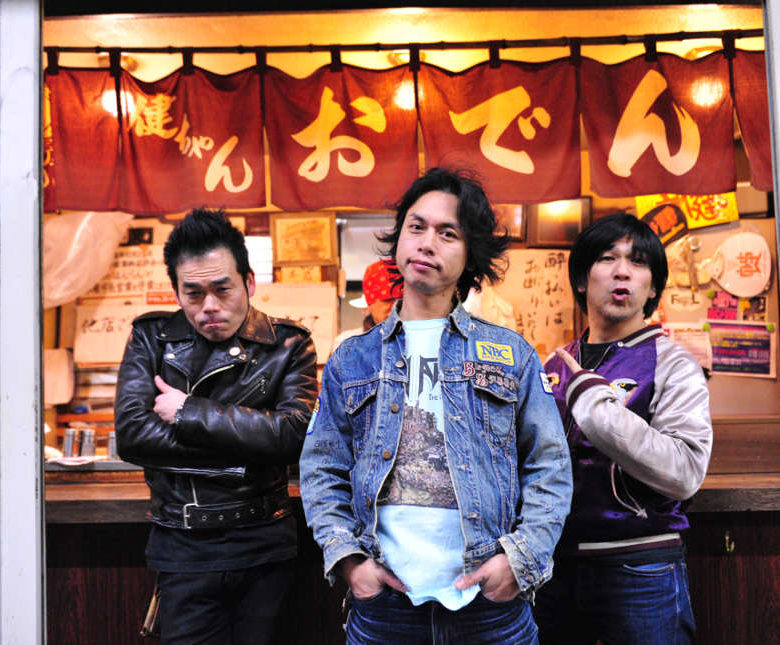