Emma Hynes celebrates a trio of releases with an intimate night at The Workman’s Club. Special guests are Brew, Ray Gilligan & Keeley Moss.

Emma Hynes releases her new single, The Space Between, on Friday 1 July 2022.

The third and final track in a trilogy of songs, this intimate night at The Workmans’ gorgeous Vintage Room celebrates the release of all three.

As an independent artist and singer-songwriter in the alt folk / new folk / indie folk genres, Emma brings her lifelong passion for music and writing to everything she creates.

Her music has enjoyed airplay across Ireland, including on RTÉ 2XM and Radio Nova where Don’t Forget made the Top 100 Songs of 2021 via the Nova Guestlist. Described by Broadsheet.ie as being “like a lost classic by The Carpenters,” Sometimes was chosen as The Acoustic Yard Radio Show’s Song of the Week on Blues and Roots Radio.

Emma has opened for US folk rock two-piece Native Harrow; cinematic, atmospheric alt-rock band HAIL THE GHOST, and was one of sixteen featured artists at the Dublin Quays Festival In 2021.

With a voice variously described as ‘pure’, ‘soulful‘ and ‘haunting,‘ and songs that are ‘poignant’, ‘wonderfully emotive’ and ‘thought-provoking’ (Indie Buddie, Broadsheet.ie) Emma performs a solo acoustic set of these recent releases, and more. She is delighted to be joined across the evening by three very special guests.

Dublin-based psychedelic dreampop artist Keeley is one of the most exciting acts to come out of Ireland in recent times. A Dimple Discs and Schubert Music signee rising rapidly on a blissed out wave of sonic euphoria, she too celebrates a new release; her debut mini album, Drawn to the Flame, which is out on 1 July. While usually accompanied by her band of the same name, Keeley treats us to a rare solo appearance which is absolutely not to be missed.

Lead singer and songwriter from Dublin power-pop band StereoType, Ray joins us fresh from the release of their celebrated debut single, Boy In The Streets. Having headed up well-known and highly respected Dublin indie outfits The Josephs and The Cherry Brogues, Ray is no stranger to fronting successful bands with great tunes at their heart. He joins The Brogues for a one-off reunion gig on 20 August 2022. But first, as an impeccable singer/songwriter, we’re very lucky to have him perform a solo acoustic set from the myriad classics he’s penned.

New York native and proud Dubliner Brew has been a prominent fixture on the Irish music scene for over two decades now. Known as the energetic front man and singer/songwriter from garage rock stalwarts Blue Sun, and more recently as a talented solo artist in his own right, he celebrated his latest release, So Much From A Little, on 24 June. Melodious, catchy and moving all at once, seeing Brew perform a selection from his impressive catalogue of songs solo is always a joy. 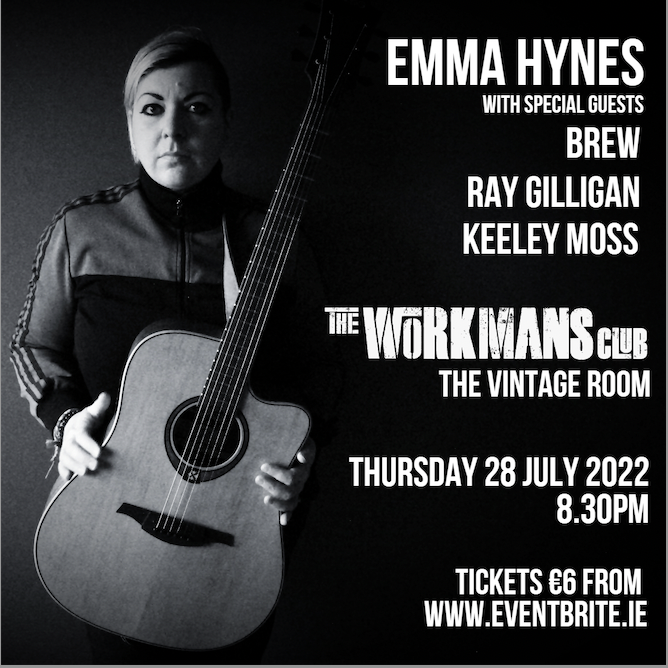