10:00PM Suga Knuckle are an indie rock quintet from Dublin. Having formed in late 2021 by members of Chow Mein, Jesuit Drips, and Kyro Jones, Suga Knuckle combine addictive hooks with a live energy that has caught the attention of crowds all across Dublin.

With two singles, music videos, and a lot of shows on the horizon, 2022 is set to be a strong year for Suga Knuckle.

9:15 PM Binmen are a five-piece rock band, hailing from Wicklow. Binmen blend the musical influences of bands like Queens of the Stone Age, The Brian Jonestown Massacre and Nick Cave and the Bad Seeds to create a dark, energetic and fresh yet familiar sound.

8:30 PM Cork four-piece Little Known emerged in 2019, Little Known pride themselves on “making the best music they possibly can” for their fans to enjoy. Comprising of Liam Daly on guitar and vocals, bassist Finn Walsh, drummer Niall Carroll and guitarist Matthew Lucas, the group have been causing a stir with their eclectic sound.

They released their debut single ‘Pretty Song’ as Private Idaho in 2020, which gained the group significant airplay. Their successful debut was followed by ‘I Like It’ and ‘Shed’ in 2021.

Now reformed and rebranded, fans are excited for what’s to come from the rising act. 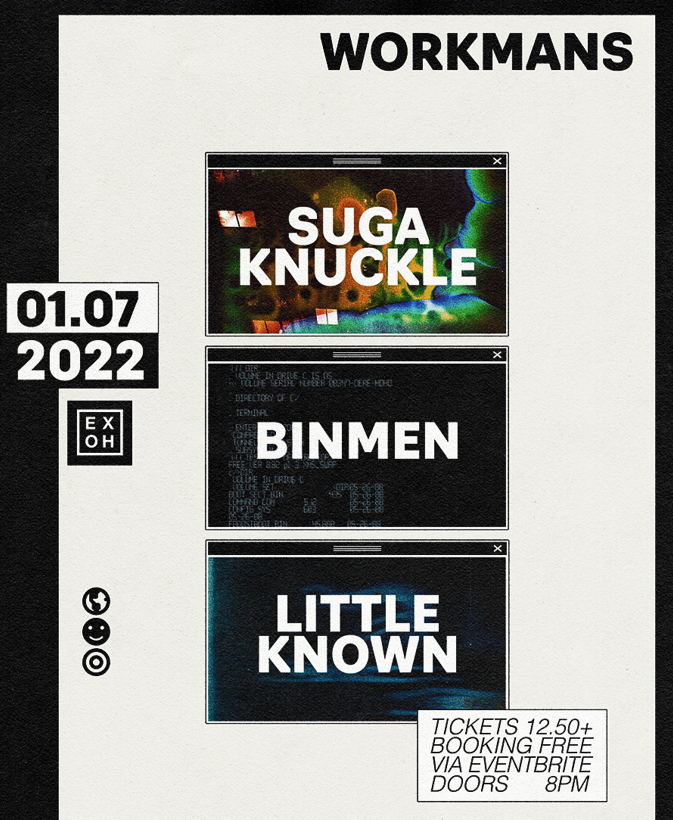