Support on the night from ‘The Elephant Room’ and ‘Civic Party’.

‘Father!’ began as the solo bedroom project of Meath native and multi-instrumentalist  Sean Brunswick.  Taking its name from the famous Douglas Reynholm quote;  ‘Father!’ became an outlet of creativity for Brunswick and an escape from the high intensity of Architecture School. Within the first year of purchasing an array of recording equipment with money he received from his final paycheck for time spent as an architectural intern Brunswick had released an 8 track album that featured  Lo-Fi  sounds paired with subtle sampling which unavoidably embraced the imperfections associated with amateur recording. The release of ‘Beach Cloud Daze’ (2018) marked the transition of ‘Father!’ from bedroom project to  live band. Recruiting fellow architecture student Stephen Allen on bass and drummer Declan Behan ‘Father!’ began to play across Dublin. In 2019, Brunswick moved from bedroom to studio for the sophomore album ‘Queen of Spain’ in order to produce a more adventurous and truer sound for the band. Recruiting close friend Mark Chester of Autre Monde, Ginnels, No Monster Club on mixing and mastering duties, Brunswick attempts to make ‘Queen of Spain’ the statement album of ‘Father!’ – a band that have been relatively ignored by the small music circle of Dublin. 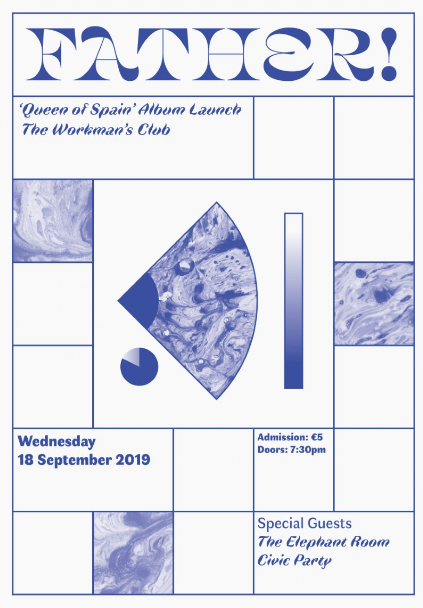