Feuds celebrate the release of their new ep with a launch show in the Workman’s Club on March 22 with support from Drivelight and Segrasso.
Doors: 8pm
Entry: €5

‘Feuds have written an indie pop classic ‘ – Musician.ie
‘Feuds provide an outlet that would be sorely missed on the Irish music scene were they not in existence.’ – Remy
Feuds a four piece indie band from Kilcoole, Wicklow. The band started in late 2014 with a different lineup, however the band settled on their current lineup and sound in 2016 with the release of the single ‘Stay Here’. In 2017 the band released the single ‘Anything I Wouldn’t’ and won play the picnic competition on 2fm and played Electric Picnic 2017.
Feuds started 2018 with a show at the Whelan’s ones to watch festival and the release of the single ‘Nothing to Happen Next’ which has been played on 2fm, 98fm and Flirt fm and has received positive reviews both at home and abroad. Feuds self titled ep is available on March 16.
Facebook: www.facebook.com/feudstheband/
Twitter and Instagram: @feudsband
Bandcamp: https://feuds.bandcamp.com/
Drivelight:
The band – formerly known as The Dynamics – came together in 2015 and with them, they brought their signature tenebrous blend of raw guitar and awakened lyrics.
Obvious was their first single to be released from their debut EP Estates , which released on the 28th October with a launch night in Whelan’s and was received well with a sold-out crowd. The songs display what they do best; pure, unfiltered music with the lyrics to match.
Facebook: https://www.facebook.com/Drivelightmusic
Twitter and Instagram: @drivelightmusic
Soundcloud: https://soundcloud.com/drivelight
Segrasso:
Segrasso was formed in Dublin in 2013 by Jake Regan and Hugh O’Rourke. Heavily influenced by ’90s shoegaze and noise pop, they released their debut EP, ‘Headaches’ in early 2014. Since then they have released two follow-up EPs, ‘Too Late and No’ (2015), and ‘Jokes to Tell’ (2016). Their music has gradually moved away from the long, My Bloody Valentine-influenced songs of the earlier Eps, and approached faster, shorter, melody-driven songs, in the vein of Pavement or Dinosaur Jr. Their most recent release incorporates some more experimental elements, including a cover version of The Knife’s ‘Heartbeats,’ and a foray into synthesizers and samplers. They remain a guitar-driven indie-rock band, however, and future releases will focus on a return-to-basics ethos.
Facebook: https://www.facebook.com/SegrassoOfficial/
Twitter: @segrassotheband
Bandcamp: https://segrasso.bandcamp.com/ 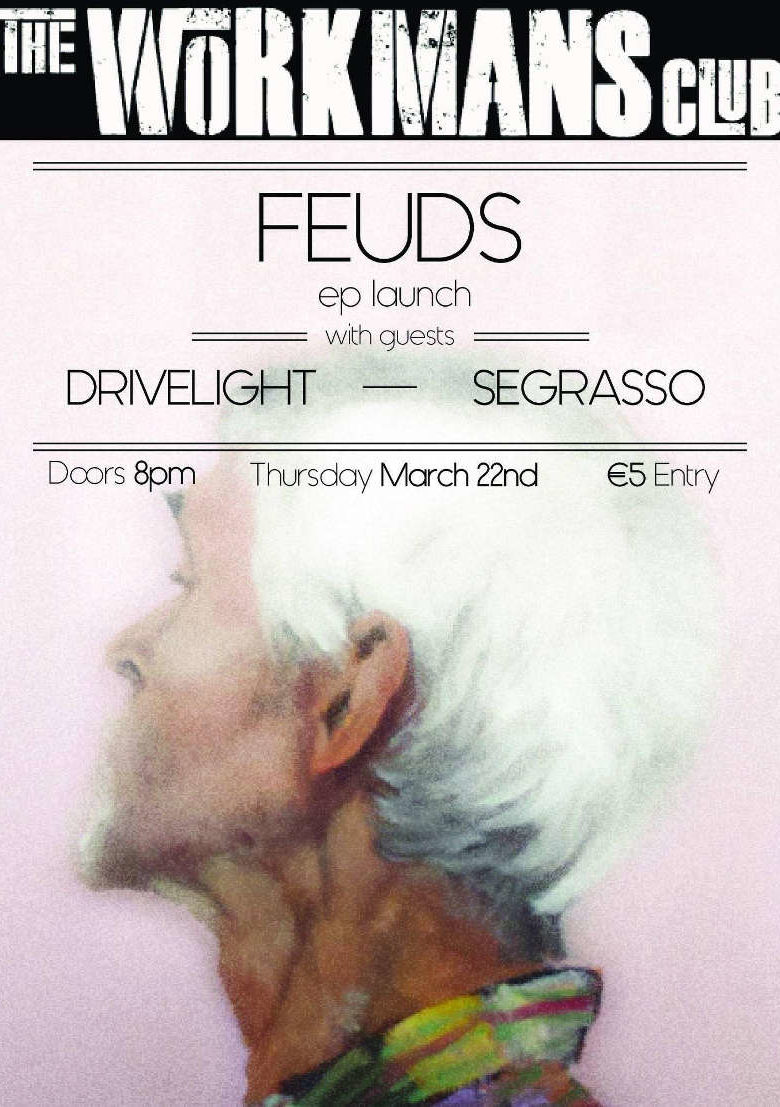