We are pleased to announce the debut Dublin headline show for Cork art-punk band Pretty Happy following the release of their new Sluggers Bridge EP.

The art-punk trio, Pretty Happy, draw on the rebellious tradition of Cork post-punk with their new EP Sluggers Bridge, released with Art For Blind Records. The band has sculpted their own theatre influenced, all-consuming noise rock style and invite you to come to the show. After the whirlwind success of previous singles ‘Salami’ and ‘Sea Sea Sea’, receiving acclaim from BBC Introducing, BBC 6, KEXP Seattle, BBC Ulster and Dan Hegartys Track of the Week on 2FM, Pretty Happy will release Sluggers Bridge, accompanied by new single ‘Sudocream’, July 16, 2021.

From fast post-punk to droney spoken word monologue, Sluggers Bridge captures the chaotic energy of a Pretty Happy live show. Of the EP, Pretty Happy say: “With Sluggers Bridge we have attempted to capture our live theatre-influenced, art-punk sound. We wanted to make this EP as interdisciplinary as possible, incorporating elements of spoken word and taking as much inspiration from the Irish stage as we do the Irish music scene. This EP is uniquely Cork, influenced greatly by the people and humour of the city.”

Accompanying single ‘Sudocream’ is an erratic howling punk track, switching between fast-paced jagged guitar to soothing and melodic spoken word. The chorus is a desperate cry to soothe all of your self-inflicted burns. The spoken word section follows the Cork-centric story of a girl ill from alcohol poisoning while she sits in the Mercy Hospital. Meanwhile, her other half sits across the road in the Franciscan Well pub (or Fran Well) sipping a pint and couldn’t care less. ‘Sudocream’ cures all, she’ll eat sudocream like sour cream to cure all her ailments.

The full version of Sluggers Bridge EP will be available to buy exclusively on Bandcamp while you can also stream the new single ‘Sudocream’ on Spotify from July 16, 2021.

Pretty Happy are delighted to be teaming up with Art For Blind Records on the release of the Sluggers Bridge EP. Fans will also be able to buy their very own Pretty Happy merch and cassette tape through both pages on Bandcamp.

“‘Salami’ is a phenomenal track. Reminds me a lot of if Parquet Courts and the Viagra Boys collabed and were Irish. I love the post punk element and influence in the song.” – Sofia K, KEXP

“From the moment I heard [‘Salami’] it put a smile on my face and it hasn’t gone away since. It’s an absolutely amazing piece of music, what an amazing band they are too” – Stephen McCauley, BBC NI

“We’ve a burgeoning love affair with Pretty Happy, a Cork trio of the experimental post-punk variety who sound at time like a deranged Pixies – which is an entirely good thing!” – Hot Press, A&R Department

“Cork band Pretty Happy‘s ‘Sea Sea Sea’ is the oddball at the party this week – a new wavey post-punk track which delights in its Cork-accented delivery and earworm melody. The song is about “queer identity and gender stereotyping”.  – Nialler9

“Having made an impression on gig-goers pre-pandemic with a live show that borders between playful, theatrical and unhinged, ‘Salami’ continues in that vein, marrying Pixies-inspired loud-quiet dynamic to stream-of-consciousness rhyming and vocalising.” – Mike McGrath Bryan, Irish Examiner

“This Cork band have been something of a best-kept secret up until now, but 2021 could well be their year. They’ve got off to a good start with two smashing singles, ‘Salami’ and ‘Sea Sea Sea’; the former a menacing, stalking, cacophonic thrill-ride, the latter a dark belch of chaotic indie-punk. We can’t wait to hear what the trio come up with next.” – Lauren Murphy, entertainment.ie

“Listening to Pretty Happy feels like someone left the tap on at full blast, washing you away with noise and raw energy.” – NamelessFaceless 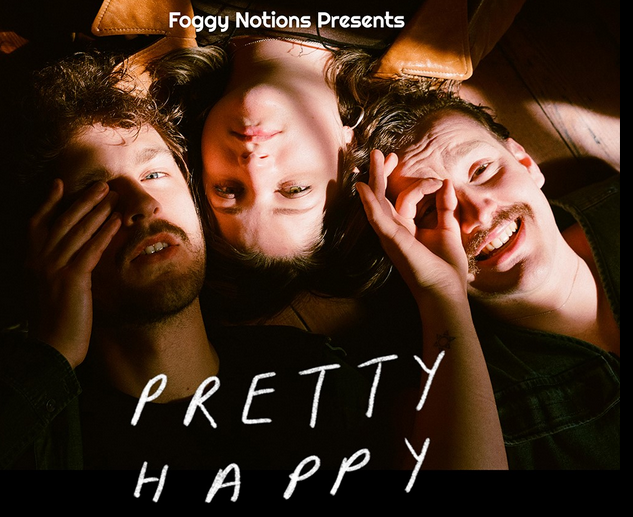