“Rock’n’Roll so pure and thrilling, it sounds like a breath of fresh air”- John Robb- Louder Than War

2017 has been an incredible year for the band and there are some very very VERY exciting things in store for 2018.

But before we ring in the new year, Fontaines D.C. return to their home from home – our gaff -, for what will be their final show of 2017. Saturday, 23 December. Do. Not. Miss. This.

This year, the band have released 2 singles and 4 accompanying videos – Liberty Belle/ Rocket to Russia and Hurricane Laughter/ Winter In The Sun. Both records were named “Rough Trade Single of the Week”. Not too shabby, eh?

The tracks received massive Irish airplay – getting tonnes of spins from the likes of Paul McLoone (Today FM), Dan Hegarty (2FM), John Barker (98FM) and Kelly Anne Byrne (Today FM). They also struck a chord with the likes of Across The Line on BBC Northern Ireland and even got the nod from BBC6’s Alternative Tastemaker, Mr. Steve Lamacq.

They’ve opened for band’s like The Horrors, Lemon Twigs and Hinds while playing almost FORTY of their own headliners the length and breadth of the country. Who can forget the Hurricane Laughter Launch at The Button Factory? They hit London for a couple of headliners and sold out their headliner in Madrid, while also performing twice at Electric Picnic.

Throughout the year, folks in the know have said some very good things about their records.

Hurricane Laughter/ Winter In The Sun.

“Dublin’s latest sensations Fontaines return with a new two track 7”. On one side is Hurricane Laughter which is an insistent and repetitive song built on a Mark E Smith style spoken vocal and a band who are locked into a rock n roll groove. The hook of “And there is no connection available” lingers long in your mind after the song has left the building” – Rough Trade

“Classic rumblepunk in the tradition of The Ramones, The Fall and The Libertines.”- Across The Line- BBC Northern Ireland

“The Fontaines are a Dublin band who are unmistakably Dublin. Liberty Belle is a retro rock’n’roll jam fitted with a Dublin accent. It’s short, sharp and stands out. It has that instant appeal you got when you first heard the Vaccines or The Strokes. This deserves two minutes and thirty nine seconds of your time.”- Rough Trade

“Two songs with the DNA of 1950s rock’nroll, thumping garage and psych.”- Nialler9

“Liberty Belle and Rocket To Russia are two terrific bangers from Dublin band The Fontaines. This is up an’ at ’em punk ‘n rockabilly-inflected guitar rock sung unapologetically in Dublin accents. You want this you really do…” – D

Rumblepunk? Retro rock’n’roll? Pure genius? Up an’ at ‘em punk ‘n rockabilly? Call it what you want – this all sounds deadly to us. If you haven’t caught Fontaines D.C. live yet then you really should. If you have seen ‘em already then we know we’ll see you up the front again at this one.

Tickets are on sale this Friday, 1 December for €11 on the door / €10 in advance from ticketweb.ie 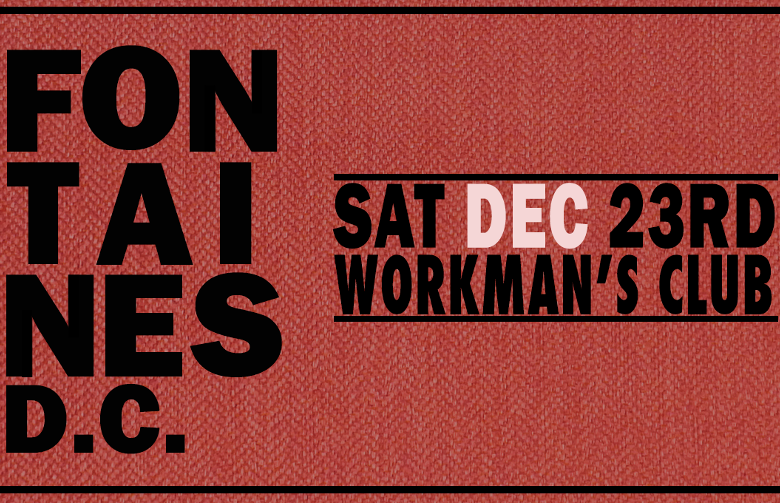