Our May line-up is as eclectic as it is excellent. Headliners Bullet Girl make a welcome return to the Gigonometry stage with their high octane set, fresh out of the blocks Sprints have dashed off to a great start, with fantastic reviews of their few live shows to date, whilst the Dunboyne contingent are amply represented by the elegant Lady Landscape, and the subtly arresting voice of Jamie O’Reilly making his Gigonometry debut after a stint in Germany where he recorded his debut album.

Bullet Girl are a four piece post-punk outfit from North Dublin. Having played under a different name for over four years before deciding to rebrand as Bullet Girl early 2017, they quickly caught attention with their debut single Post Atomic Youth, laying the foundation for a renewed interest in their alluring live shows. 2019 has kept the momentum up, with shows in various Dublin venues including a St. Patrick’s Day performance in The Workmans Club, followed by a Record Store show in R.A.G.E. Records.

Upcoming alternative rock band SPRINTS are proud to announce the release of their debut single ‘Pathetic’ on April 19th, celebrating the release with a launch party in The Sound House on Saturday April 20th.

‘Pathetic’ is a punchy, raw and powerful anti-love song with punk and classic rock influences. It was recorded in Darklands Studio by Dan Doherty, mixed by Robin Ball and mastered by Fergal Davis.

SPRINTS are a fast-paced and melodic alternative rock group. They combine pulsating riffs with swelling drums and emotive lyricism to create a unique sound. Taking elements from post-punk and beyond, they’re a band best seen live and in their element.

Comprised of Karla Chubb, Colm O’Reilly, Sam McCann and Jack Callan, the band have over three years gigging experience as individuals and are looking forward to storming the gig circuit in 2019.

SPRINTS played their first gig in Whelan’s this February, and have quickly gained a reputation as a ferocious live band. They have since played gigs in a number of Dublin’s top music venues and support UK band Alexis Kings on the Irish leg of their European tour in the Workman’s Club.

Upon forming, the then two piece band released their first EP ‘1’ in 2018, before taking a short hiatus, whilst Harrison spent some time in Vancouver, Canada to work on new demos. McDonnell and Harrison then returned to work in their makeshift bedroom studio to craft and shape their second release ‘2’, due to be independently released in Spring 2019.

Constantly developing their sound with each release, Lady Landscape became a five piece this year, incorporating friends of the group: Jamie Reynolds (Drums), Tiernan Buckley (Bass) and Adam Olin (Lead Guitar), for a series of live shows in Dublin.

Jamie O’Reilly is a dream folk artist from Dunboyne. He has won the SCC songwriting competition in 2017 with his song ‘Canvas’ and has played at the

Christie Hennessy festival in Co.Kerry whilst also playing many of Dublin’s music venues. After finishing his diploma in the rock school in Ballyfermot, he studied at the Popakademie Mannheim, where he recorded his debut album which is due for release later this year. There is no doubt this outstanding young artist will make his way through to the big stages – some have compared him to a younger, Irish version of RY X, his fragile and echoing voice sticks with the audience long after the show. 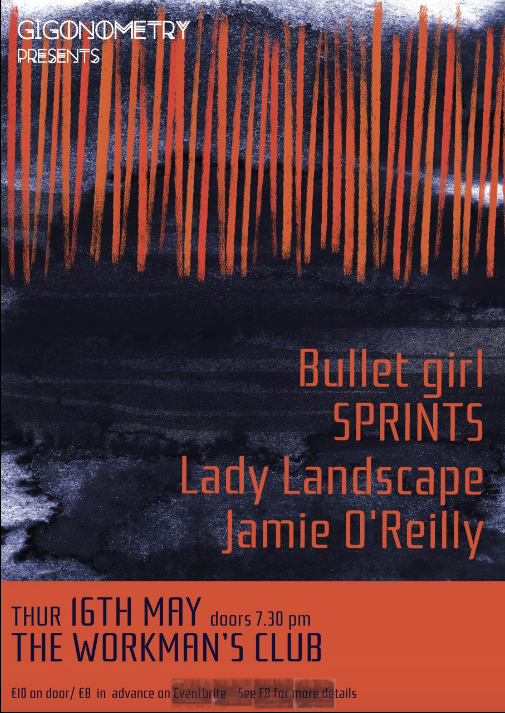