The success of the monthly Thursday night Gigonometry Presents… series of showcase gigs (now in its third year in The Workmans Club) has resulted in unprecedented demand from acts and audience alike. The addition of this new weekend gig featuring some of the Gigonometry crew’s favourite acts that have previously performed will go some way to satisfying the hunger for what has become one of Dublin’s most beloved original music events.

Our inaugural event features some fine female-led talent; Dreaming of Jupiter are led by the amazing guitarist/keyboard/singer that is Zoe Gough, Emma Lou & the Agenda are one of the finds of 2016 with front-woman Emma being one of Ireland’s finest voices at the moment, there’s not much to be said about the enigma that is Farah Elle, who has gone from strength to strength since her performance with us last April, and she’ll be joined by her backing band on the night, whilst opening act ELLYD graced the stage with us last Autumn, hot on the heels of her excellent EP ‘Rise’, and has been picking up fans ever since on the back of it and her relentless gigging schedule.

Dublin-based Dreaming of Jupiter’s music is a fusion of melodic pop, ambient and electronica, with soulful vocals that have been described as deep, thought provoking  and ‘ visually  stimulating’. Their live performance also packs a powerful punch with the multi-talented front-woman Zoe Gough letting loose on mind-bending guitar solos, in between vocal and keyboard duties.

The band are currently recording their debut album from which their first single “Light of My Life’ was released at a sold-out Whelans in September 2016.

Mixing the influences of Prince, Ray Charles, & Aretha Franklin, Dublin based Emma Lou & The Agenda released their debut EP in May 2016 to positive reviews. Their meteoric rise ever since (Electric Picnic, a headline show at Whelan’s as well as a ‘Ones to Watch’ performance at the same venue, the Late Late Show, Gigonometry Presents…) sees them ready to soar into the musical stratosphere.

Emma Lou’s unique voice is both powerful and fragile, soulful and strong, and draws the listener into her world, where humour mixes with heartbreak. Backed by the superb trio of Manny on drums, Adam on Bass and Ritchie on Guitar Emma Lou & the Agenda have found the perfect blend for our times.

The band are currently putting the final touches to their new EP scheduled for release in summer 2017.

Farah El Neihum, otherwise known as ‘Farah Elle’; is a songwriter with an alternative pop sound influenced by an eclectic taste of genres; from hiphop to R&B and ska, while featuring Arabian echoes from her Libyan background. She is currently based in Dublin, having moved to Ireland with her family when she was 2. Her rhythmic lyrics, piano driven songs and distinctive voice aim to reveal something of the beauty in the ephemeral everyday. She is currently writing her debut album at home, and collaborating with different artists and producers – For the meantime, her single “Silk” is available on Spotify, iTunes & Soundcloud –  as well as “Feel It Out” a collaboration track with BANTUM, lyrics and melody written by Farah Elle.

“… the ethereal Farah Elle, whose demure, pixie meet Audrey Hepburn persona, won the crowd over. Working her inner Freddie Mercury with plucky, Queen-like piano and ethnic music influences, the distinctive singer stood out as an act to watch out for.” – HotPress
“Farah Elle’s brand of alt-pop forgoes the use of much instrumentation; her ambling melodies are propped up solely by her distinctive half-sung-half-spoken vocals and the interesting ways in which she draws upon her Libyan heritage and Irish upbringing.”  – GoldenPlec.com

“Farah Elle opens the show, and quickly enchants the audience with her phenomenal voice. She commands the attention of all present perfectly” – Dublinconcerts.ie

ELLYD (Elaine Doyle) has been a stalwart on the Irish music scene under the guise of various music projects for some time before deciding to undertake a solo venture and record her debut EP “Rise” in 2016, debuting her new material in Berlin, followed by s string of gigs in Ireland culminating in a launch gig in The Workmans Club.

The EP was recorded, mixed and mastered in Jam Studios with Martin Quinn, and has been highly acclaimed for its consistently strong songs, blending Blondie-style vocals with a modern pop fee. “Rise” reached number 8 in the iTunes charts and has been played on various national and local radio stations. The other tracks  “If It’s Cool” & “Say” have also been released as singles with accompanying videos.

ELLYD is back in the studio and plans to release her first single of 2017 in the Spring. 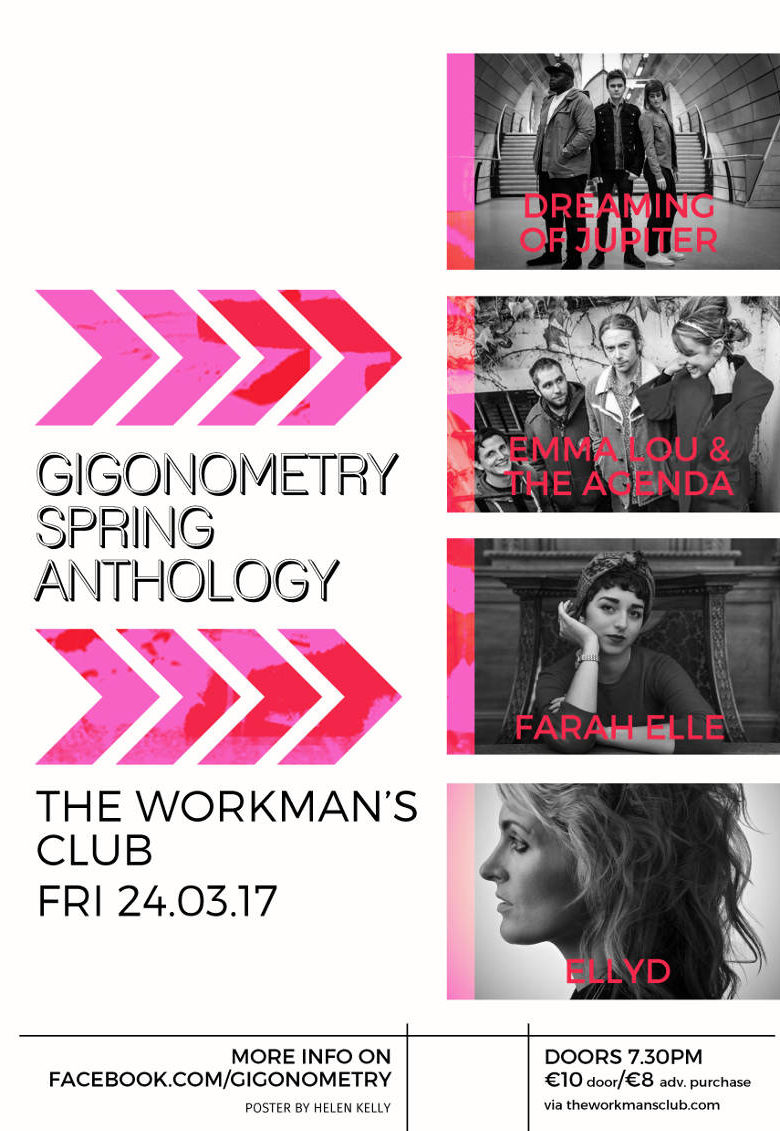