The second of our summer 2-nighters in The Workmans Club opens with a return visit from Electric Shore, who’ll release their latest single to coincide with this gig. The intriguing post-rock Wexford outfit Jenkinstown pay a rare visit to the big smoke to enthral us with their intensely brilliant live performance, and opening up is new Dublin-based ensemble Scattered Ashes.

Formed in 2013, the growth and development of Electric Shore has seen childhood friends transform into aspiring collaborative musicians, who are eager to make an impression on the Irish/UK music scene in 2019.

2018 was an important year for Electric Shore, the group released their debut single ‘Too Different’ which was followed by the even more successful ‘Someone New’. The band also participated and won RTÉ 2Fm’s Play The Picnic Competition, which landed them a brilliant slot at the iconic Irish Festival.

Now more than ever before Electric Shore are determined to make 2019 their most memorable year to date. In February the band released the highly successful track, ‘Darkness Of You’ which saw the band receive nationwide radio play, and accumulated thousands of Spotify streams in the process.

Building on this momentum, Electric Shore delivered their second single of 2019 titled, ‘Hurricane’. The new track features catchy guitar hooks, supported by a strong pop-rock melody in the chorus. ‘Hurricane’ was released on the 24th of May and is still building a head of steam.

The ethos of Jenkinstown since its inception in 2011 has always been to create the sort of art which they would consume if they were outside of themselves, looking in.
This is achieved by attempting to deconstruct the notion of what music is, challenging themselves to advance in their creativity and also to simplify when necessary.
Frequent guest collaborators have taught them much on their long road through this pop life. Hugz not drugz, brother.

Scattered Ashes are an abrasive Dublin 5 piece ranging in influence from Post-Rock to Punk. Steeped in appreciation for the abstract, the band match aggressive sonic textures with a strict sense of space referencing sounds from the past and present. 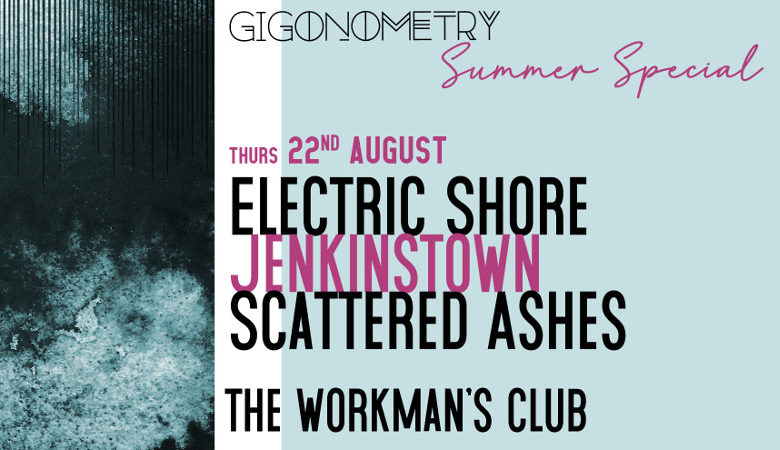