Just Mikey
Just Mikey are an energetic 7 piece band, hailing from Dublin and Meath.
There is no real genre that can be put on the band – as each song seems to
bend genres and have its own unique sound. It could be to do with the fact
that the seven band members all have different musical influences and are
not afraid to blend these influences and styles, Hip Hop, Rock, Disco,
Punk, Trad, nothing is off limits! Mick’s style of rapping mixed with
Adam’s vocal, and the sounds that the rest of Just Mikey brings, is funkier
than morning breathe.

Just Mikey was originally formed by Mick himself, hence the name, as a solo
rapper. Mick teamed up with two of his closest mates (Adam And Bam) to form
a small band and see how it progressed – well it progressed brilliantly,
and now there are seven lads that perform live in “Just Mikey” (ironically).

The band are currently putting the finishing touches to their new set of
tunes, with a new single dropping in September, after a highly successful
brace of gigs at Electric Picnic.

Orwells ’84
Orwells ’84, will for the first time take to the stage in The Workmans
Club for Gigonometry. A gig we have been looking forward to for sometime!

REMY – “The first buds of something which perhaps might grow into something
special, all they need to do is let fly”

Golden Plec – “a melting pot of sounds that when stirred together. In the
wrong hands this would be a jumbled up mess but so far Orwells ’84 are
managing to pinch enough from each of their influences to keep it coherent”

U&I – “It really deserves to be held in high regard because they have
achieved something of an accomplished effort on this one. 9/10”

Bullet Girl
Bullet Girl are a four piece post-punk outfit from North Dublin. Having
toured Dublin under a different name for over four years before deciding to
rebrand as Bullet Girl early 2017, and tour across Dublin with two dates in
Whelan’s, The Mezz and Fibbers over the summer. 2018 has already seen the
band headline The Workmans Club along with support dates with The Nilz.
They are a ferocious dose of post-punk meets noise rock.

“‘Post Atomic Youth’ is an ear-bleeding and blistering debut which stays
extremely loyal to the central tenets of punk music.”
– Remy

“The band have successfully captured their ferocious live sound on a
record; something few acts can boast. And for a debut single (POST ATOMIC
YOUTH), that is an achievement in itself.”
– Marky Edison

Nathan O’Regan*
Hot on the heels of their EP release in Belfast’s Black Box in Sept, and
having been featured on RTE1’s playlist, Nathan O’Regan and band play their
first and highly anticipated show at Gigonometry.
This talented singer/songwriter has been making waves in all the right
places and 2018 sees him rising steadily to national and international
acclaim.

Gigonmetry.com is an online group of live music lovers. The 3,600+ members
aka Gigonometrists are constantly meeting up to go to gigs and festivals
together, share musical as well as gig experiences, and generally enjoy
being in the company of fellow music enthusiasts!*Gigonometry Presents…* is
their monthly fix of up and coming original acts; the shows are highly
sought after by 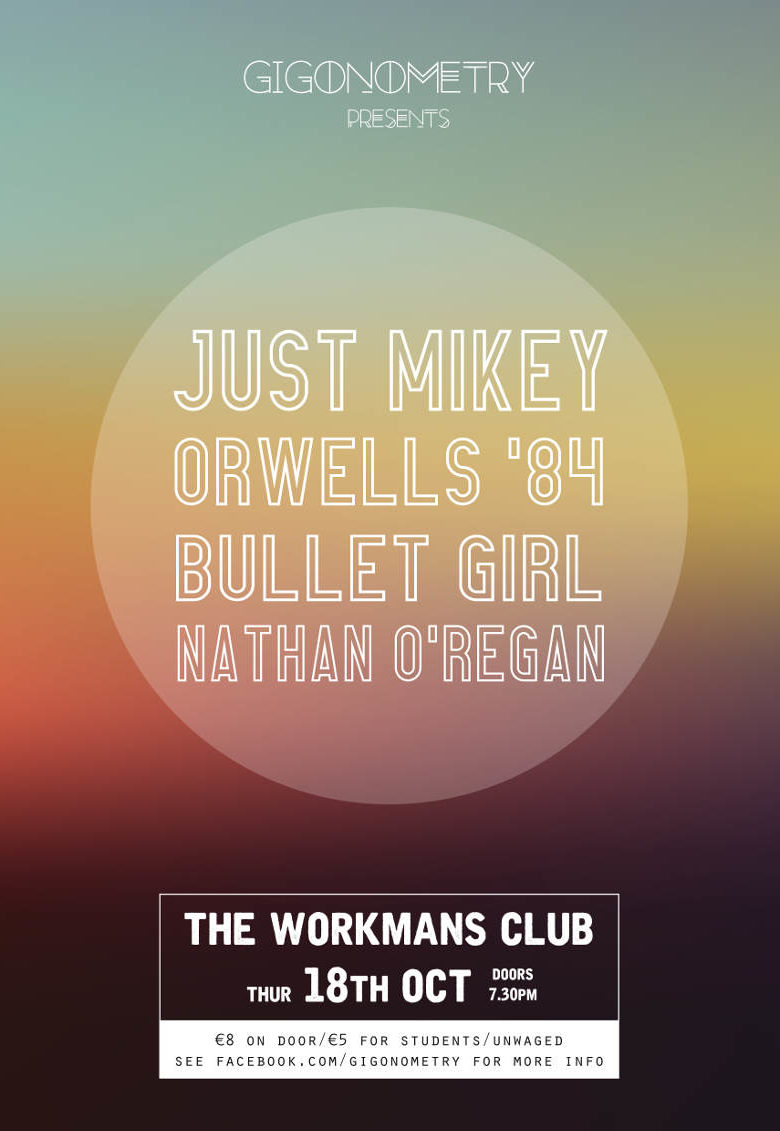