It’s our 4th birthday in The Workmans Club and we’re celebrating by having a 5-act line-up, an extended curfew, a Dutch band, Kiruu, smiles, laughing and dancing. Come along early for the unique talent and astute observer of Irish life that is Junior Brother, Harry Hoban and the Brothers Kane will keep things interesting, then Run in Red will move things up a notch with an experimental 2-piece show, before our NL friends Electric Company turn the wattage up to dangerous levels, and to finish the evening we have the multi-cultural, world-beats influenced sounds of Kiruu with his band of talented troubadours to send us off happy into our infantile infinity.

Kiruu is a multi-instrumentalist and singer of Irish-English origins whose eclectic sound has been formed with influence from his East African upbringing and European roots Ireland/UK/Spain). His music is interactive and his sound varies from slow indie to stomping swing and everything in between, sung in different languages (English, Swahili, Spanish, and French). Based in Dublin, Kiruu plays both solo set (an intimate  sound looping, guitars, piano, and percussion), and also with band consisting of himself and dynamic and diverse musicians from the Dublin scene, providing a high energy live show.

In 2014, Kiruu released his EP “Kiruu & Baobab”, which was recorded Valencia.  following this, he toured in East Africa, France, Belgium, and the UK. Resettling back in Ireland, he launched his EP in late 2014, and has been performing around Ireland since then. In 2015, Kiruu signed a publishing contract with GD78 Music. In April 2016, he started recording his first full length LP. In February 2017 he released “Síocháin / Peace” as a single, plus music video, featuring Kíla’s Rónán Ó Snodaigh.

Kiruu has performed and collaborated in different musical projects in Ireland, England, Spain, Argentina, France, Tanzania, Belgium, and Kenya both as front man and as pianist, guitarist and singer. He is a tenor in the Dublin Gospel Choir, and also does musical theatre.

Zac Chapman’s Utrecht based band Electric Company has been working hard on their new line-up. A breath of fresh air has blown through the sound and songs with the arrival of new drummer Quinten de Jongh and Sophia Vernikov on the keys. Having released a teaser track and an official single, the band has already spiked a strong interest abroad through the likes of online-streaming services such as Spotify. Sounding more modern than ever before but sticking to the authenticity of their own style, their brand new single “Let’s Write Another Plan” takes a step further in telling a story that seems a very central theme for this band; a story of positivity overcoming disappointment… with a beat very reminiscent of early Springsteen and a melody longing for the glory days of Britpop. The band has put an even bigger emphasis on the typical sound of Electric Company, influenced by the great American and British artists before them. The video’s form a bridge between these two major factors, with the latest being recorded by Gosse Bouma in Amsterdam. The new single will also coincide with the announcement of the debut EP ‘Tailspin’ which will be released on April 4th and will be supported by a club tour of The Netherlands and a two week tour of Ireland followed shortly after.

A 3-piece Transatlantic band based in Dublin, Run in Red  are urgency transcribed into music. With members from the Dublin and New York music scenes, in 2017 the band  toured stateside followed by the release of their debut EP:

‘The Revelled Theory Mind. Its lead singles  ‘Fade Away’ & ‘The Ricochet’ have drawn praise from  Joe.ie

TogetherFM  and have recently been play listed on Pandora Radio. Currently playing select shows in Dublin, the band are recording their follow up EP this March.

Their music is an eclectic mix of everything from acoustic folk to storytelling ballads with a punk edge  .

They have played to packed houses in Whelan’s , The Spirit Store and The Sugar Club recently to name a few .

they attack festival season , spilling their guts through story and song  .

Junior Brother is an alternative folk singer/ songwriter from Kilcummin, Co. Kerry, playing slightly unhinged, sometimes heady, folk songs of his own creation. In his music he is heavily influenced by his upbringing in rural Ireland, attempting to recreate the archaic, weird and beautiful nature which surrounds his family home and littered his childhood.

Currently based in Dublin, Junior Brother’s played the annual Whelan’s Ones to Watch festival the last two years and has played support for acts such as the Hot House Flowers, R.S.A.G. and Mark Geary. He has performed in venues such as the INEC Killarney, Cyprus Avenue Cork, and The Grand Social, Dublin to name a few.

He has three EP’s; a demo collection called ” The Slane is Gone “, the “Sleeping at the Bottom of the Sea ” EP, which has gotten some rotation on RTE Lyric Fm’s Blue of the Night show, and a new EP recorded over a year in his family dining room called ” Fuck Off I Love You “. Influences include Planxty, Richard Dawson, Pentangle, Richie

Kavanagh, the harp playing of Derek Bell and Alan Stivell, and the vocals of Dessie O’Halloran and Joanna Newsom. 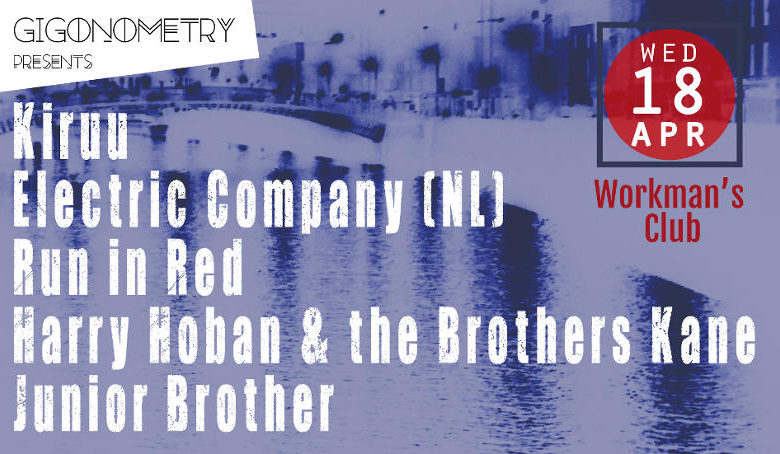