Our last gig of 2017 and what a cracker it is!! Whatever your taste, favourite genre, mood or whatever, like a Gelato outlet we’ve got it covered. For the exotic tastes we’ve got the ephemeral Mystic Tears with their beautiful, expansive and cinematic songs. For the more electronically inclined with buckets of ambience (think hazelnut and translucent strawberry) we’ve got the return of one of our fave ambient electronic acts Grouse. You want something with a bit more bite, something to chew whilst the gelato slides down your gullet, well Cork-based Italian duo Order of the Mess will do exactly that, and for your appetizer we’ve got the remarkable NIMF herself, accompanied by who knows on the night!

MYSTIC TEARS make raw & visceral music, harkening back to the glory days of Grunge but with a divine sweetness that elevates the listener into a higher state of being. Songs such as ‘King On The Cross’, ‘Ouachita’ & ‘Mouse Kills Man’, fearlessly emblaze the state of disgust they each share for the corrupt & unjust nature of governments, religion & capitalists – while tracks like ‘Most Wanted’, ‘SHINE’ & ‘Wise One’ beckon us to liberate our souls from the shackles of ego and return to the awareness of our true nature.

MYSTIC TEARS rain down on a world under siege by its own volition. Their firepower and wanton wildness reawaken that sleeping rebel inside us all and affirm the revival of real music played by real people in a world so far from reality that it’s lost its own shadow.

“Dunnes every fibre seems to vibrate with an out-of-kilter shamanistic energy that is hard to define, other than to say it is equal parts Jim and Van Morrison” – Barry Egan, Irish Independent.

On record, Grouse tends to be cinematic and trippy, downtempo in nature, but live, Grouse is a different beast with improvised guitar, heavy percussion, live drums, jazzy vocals and brass, all the while keeping the electronic edge that characterises the Grouse sound. At home on the stages of the Irish summer festivals, (appearances include Electric Picnic, Castlepalooza, Sunflower Fest, Vantastival), as well as the dirty rock clubs of the city, the Grouse live band tends to create an fairly epic sound.

The band consists of Ronan Carroll on guitar and synths and a cosmopolitan mix of members from all corners of the world.

Most recent album, ‘Oslo’, was ‘Album of the Week’ for Nialler9 and Dan Hegarty and received props from trip-hop legend Kid Loco, Jon Kennedy and Ben Mono amongst others. After taking a break over the last few months to work on new music, the Grouse live band is back with a new set for gigs happening late 2017.

‘Album of the Week. An outstanding piece of work’ – Dan Hegarty (RTÉ 2FM)

Order of the Mess

Order Of The Mess is an indie/stoner rock power duo formed in 2013 by Alex (guitar/voice) and Max (drums), two stray Italians who found each other in the People’s Republic of Cork. With Alex also taking care of punishing  low frequencies through a triple amp set-up and Max providing thunderous skin work, the duo early  on hit on a distinctive sound and began to write. They soon hit the live circuit and every performance saw them winning over more and more appreciation as their mix of melody, groove and enormous riffs truly comes to life on stage through the duo’s earnest, ‘give-all-you-got’ energetic attitude and Alex’s passionate, larger-than life stage presence. In 2016 they locked themselves in the historic Dublin’s Westland Studios for a week to record their debut album, which is set to be released in early 2018.

“Cork/Italian lads “Order of the Mess” power-duo noise-rock […] stuff on Soundcloud paints a rough but promising picture, that of a multifaceted, but bludgeoning weighty aural attack” – The Thin Air

A piece of software found beneath an uncanny willow tree. NIMFWARE; a story of NIMF.

Aoibhín: Synth, vocals. The Nimf herself, she is studying songwriting in BIMM and running a radio show on Raidio Na Life, she’s known for her cartoon character likeness and experimental unorthodox songs and performances. Often her ensemble is correlated with a wacky retro whippersnapper, puzzling and perplexing her cronies.

Oisín: Bass. Known as a mathematical poindexter in which he can calculate the most impeccable riffs and hooks befitting to the number, and we all know he specialises in numbers. Often embarrasses his comrades with his dangling dance moves, woven in with his mad prof shirt and suspenders.

NIMF are winners of Pure M Best Newcomer. Their most recent release, My Choice, premiered on Niallar9 and Gigslutz UK, adding up to over 10,000 views. Since, they’ve been lining up gigs in the likes of the Grand Social, the Button Factory, and the Purty Kitchen opening for KÍLA and Molly Sterling. 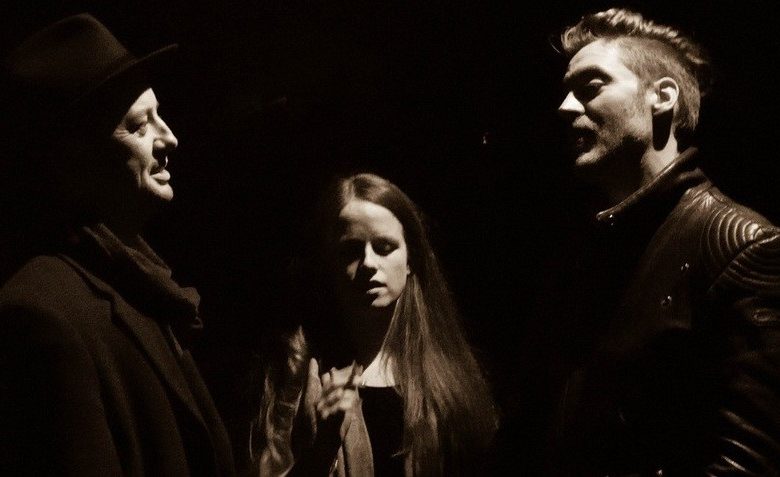