Admission: €12 on the door/€10 in advance from Eventbrite

Gigonometry is back! After a resting period, the gang return with a slightly new look, a bi-monthly show, but with all the good things still intact (attitude, atmosphere, attire and amplification). Join us for our first show of 2019 featuring NAD, hot as your grandma’s brown bread from their opening slot supporting the LIR legends in Whelans, and two superb new acts from ‘the town’ aka Dundalk, both loosely described as 4-piece rock acts, but each with their very unique take on the genre, Arco Arena and Kelso.

Tickets are €12 on the door or €10 in advance via the link below; you can choose General Admission or the band you are primarily there to support, in which case they get the bulk of the ticket money!

If you likee your rockee and your rollee, then this is where you should be!

With the 2019 release of their debut album ‘Do You Hedgehog?’, No Audio Dialogue, the Dublin based indie rock quartet will continue to add to their devoted fan base. With a steady stream of songs penned by Stephen Walker (Saccade, The Nude) demoed at bassist and recording engineer Ciaran McCreary’s (The Aunty) studio and with the addition of Gary Vitagliano (Pods, Resolve, Gladiola) on drums and Sean O’Leary on guitar, NAD have created a sound that takes its inspiration from indie rock, 90’s post-punk and radio friendly guitar based pop.

At one of their early gigs, Robbie Malone (David Gray, Hot House Flowers/LIR) approached the band and was eager to work with them as producer. Coming from similar musical backgrounds NAD and Robbie hit it off immediately and thus Do You Hedgehog? Was tracked and mixed by Stuart Gray at his Jealoustown Studios under the watchful eye of Robbie as producer. Do you hedgehog? Is a collection of 10 songs that are immediately catchy, economic in arrangement and deal with the human condition. It’s the type of music that gets under your skin from the first listen with stand-out tracks Stumble and Fall, All to Find, Hold on and Milk. Next up for NAD is the release of the Stumble and Fall video coinciding with this gig at The Workman’s Club to promote it. In addition they are booked play the summer festival circuit as well as shows in Dublin and all over Ireland.

Formed in early 2015, Arco Arena are a 4 piece riff-rock band from County Louth in Ireland. Mixing shifting time signatures with straight up hooks, described as Queens Of The Stone Age crossed with Northern Irish post rockers And So I Watch You From Afar their live shows are a rolling cascade of starting-never-stopping riffs and crowd singalongs. Their eponymous EP has also been featured on Roddie Cleere’s legendary Irish music show on KCLR. These lads epitomise the term ‘One to Watch’.

Kelso are a 4 piece indie/pop band based in Dundalk, Co. Louth. Formed in 2017 with a debut EP set for release in early 2019. Characterized by cutting guitars, heavy melodic content and a driving rhythm section. Influences include: The Strokes, Franz Ferdinand, New Order, Bloc Party. 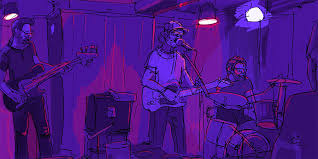