When Dublin-based singer Elaine Doyle met the recently arrived to these shores guitarist Chris O’Brien, they instantly developed a sound that caught the attention of all the right people. When the line-up solidified in the form of drummer Darren Gorey and bassist Marty Canavan the band quickly signed to Reekus Records.

“A thunderbastard of a new song… Think ‘Heads Will Roll’ by Yeah Yeah Yeahs, it’s that good.” – Joe Donnelly (TXFM)

“The production is so clean and well-considered, with cannonball drums and electro-effect guitars burning up the reel” – Shannon Duvall (YouBloom)

“The entire propellant force of the songs seems to allude to a new sense of purpose from the four-piece” – Stephen White (TheLastMixedTape.com)

Live review: “Each tune in the set is different, no filler, great breakdowns, with subtle changes in direction to keep the audience’s attention, but never trying too hard” – Festivalandgigguide.ie

From the set to the stage, the Irish musician/actor Rick Burn (‘Game of Thrones’, ‘Vikings’, ‘Penny Dreadful’, ‘A Terrible Beauty’) has his artistic plate full as he also fronts the exciting new electro-rock band MAKINGS, alongside bandmates Barry Shock, Paddy Reynolds and Raul Marcos.

The band’s recent collaboration with producer/mixer Chris Potter (Blur, U2, The Rolling Stones) resulted in the creation of their debut album ‘Cognition’, which Danny McElhinney of the Mail On Sunday gave a 4/5, also describing the track entitled ‘Heart Attack’ as an “instant hit”. ‘Heart Attack’ has also already enjoyed pre-release prime time airplay on TXFM, RTE 2FM, RTE2XM, Sunshine 106.8 and Amazing Radio in Scotland.

The band, who over the recent months headlined and packed shows in Dublin, Edinburgh and London are back on the road this October, promoting and celebrating the worldwide release of ‘Cognition’ with distributors Eire Supply on 9 October 2015, starting with this show for Gigonometry.

“They remind me of the Killers and U2. A very promising band with a sound that’s destined for the stadium” – Jim Gellatly – XFM Scotland

Described as Glastonbury’s “most special festival find” by the Spectator magazine in 2014, Twin Headed Wolf are one of Ireland’s most exciting duos. These twin sisters have developed their stage show into what can only be described as a ‘happening’ with saws and bones, ancient invocations of the Muses, and murder ballads sung by dollies.

Their playful use of instruments has seen them play most Irish festivals including Electric Picnic and Body and Soul, whilst also playing in Norway, Scotland, England, Italy, France, New Orleans and Glastonbury for the second year running. They were described as one of the best Irish artists for 2015 by Golden Plec and as “a playful, experimental, ingenious mix of old and new”, by Hotpress  magazine. They have shared the stage with bands such as This is the Kit, Mundy, Glen Hansard, Lucious, Hudson Taylor, Luka Bloom and Ronan O Snodaigh. Their twin-edged delicate harmonies juxtaposed with sinister lyrics lend an ethereal and unnerving flavour to folk music. With the upcoming release of their debut album, they are set to take this and other worlds by storm.

Mama’s Broke is a powerful duo that came together on the road, which continues to shape their unique gritty style. Their complimentary voices blend to create haunting harmonies, while they artfully juggle an array of instruments including fiddle, banjo, guitar and mandolin. Original songwriting combined with folk traditions create a compelling performance, delivered with heart and raw energy. 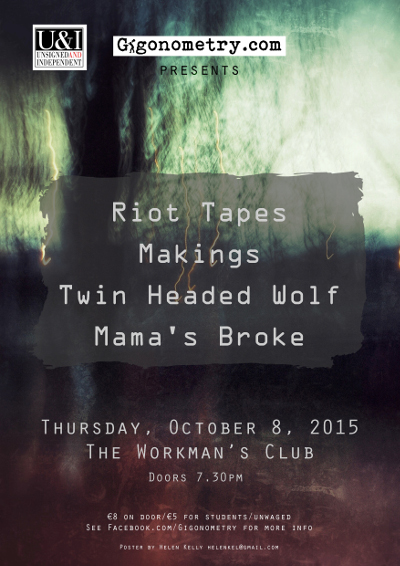