Gigonometry goes all Halloweeny for our October showcase, featuring the darkest, most horrorville acts we could find. Glued together by the vile vaudevillian Venus de Vilo, the acts will all perform their darkest material by the light of a silvery moon.

Headliner Roisin El Cherif clears the cobwebs from the night with her classical backing musicians, taking the blood stained baton from horror 2-piece Midnight Chimes. Robert Delaney resurrects souls for his soul-soaked performance, whilst Jack Spoke kicks off the night with his unique voice reaching to the depths of dark despair. Halloween fancy dress is optional but encouraged, and a make-up artist will be available to get you into the spirit, if required.

“Roisin El Cherif is an Irish/Palestinian singer/songwriter, who has been increasingly lauded since her stage debut in 2016. Despite her busy schedule as a TV/Film Producer she wrote, co-directed and produced the debut video of her first single ‘Kerosene’. Since then Rosin has played regularly, in such illustrious surroundings as the famous Ruby Sessions in Doyles, Whelans, the Grand Social, and the Roisin Dubh in Galway. She has also performed at Body and Soul, the Sea Sessions, Electric Picnic, Canalaphonic and Battle for the Lake – Achill. She completed a successful first year of live performances supporting Ham Sandwich in Galway’s Roisin Dubh.

2017 has seen her featured in HotPress as one of the Up and Coming Artists and  Kerosene was a semi-finalist the International Songwriting Competition for best Music Video, and she has been working extensively on the upcoming EP with 3 accompanying music videos. The release of her first single “Half a Life” is set for September.

Midnight Chimes is a Dublin-based horror themed band, who released their 1st EP “Halloween Moon” in September 2016. They featured on several shows on the 2XM, and have also been aired on 8Radio with the first track from their EP “Witches Disco” (featuring a guest appearance from recent Gigo artist, the sublime Saramai).

Their music is a spooky fusion of electronica and rock, featuring a thick tapestry of pre-programmed electronic midi beats, and the live show is a duo act of electric guitar, midi keyboards and vocals occasionally layered with monstrous sound effects.

Midnight Chimes are currently recording their 2nd EP which will be released in February 2018.

Robert Delaney is a singer/songwriter/lyricist from Dublin, Ireland with influences of electro, folk, blues and soul. His debut album, ‘Rising Tide’, was released in 2012 to critical acclaim, with tracks featured on popular Irish Television shows, including ‘Don’t Tell The Bride’, ‘Fade Street’ and ‘Room To Improve’. Following two years gigging and writing in the vibrant city of Berlin, Robert has recently returned to Ireland to complete his second album – ‘Numbers’. With a live launch in Bello Bar,  ‘Numbers’ showcases Robert’s trademark deep and soulful lyrics set against a grittier, more electronic backdrop.

”Delaney is an extremely talented singer/songwriter hailing from Dublin and is on course for a very promising career within the music industry” – musicscene.ie

Jack Spoke is an eccentric singer/songwriter from Dublin. Jack has graced a variety of stages from The Workmans Club (where he performed at Gigonometry in his previous incarnation as Jack & the Darling Ones), the Grand Social, Whelans & The Button Factory. Delving into dark themes exhibited through a fusion of Blues, Folk and Rock; Jack has drawn attention for his intense live performances.

The Voice of Horror: Venus de Vilo is a theatrical Irish musician specialising in the vaudeville, macabre and bloody side of dark horror music. An internationally published and acclaimed comic book artist and Gothic-horror illustrator, Venus has recently been signed to German Horror Punk record label “Undead Artists”. Venus is going on her first European tour with the label in October 2017. Vile mother of three EPs, a Frightmas album, three rotten rhymes poetry albums and one thirteen track musical monstrosity, Venus is currently working on a twenty-six track deluxe double album entitled “Cadaverotica”. If you like your humour black, and your live shows bloody then Venus de Vilo is the glitter-encrusted weirdo for you.

“Your best and worst gig so far? ….Most favourite so far have probably been Gigonometry in The Workmans for great vibes….” – Jess Kav of BARQ (entertainment.ie Jan 17) 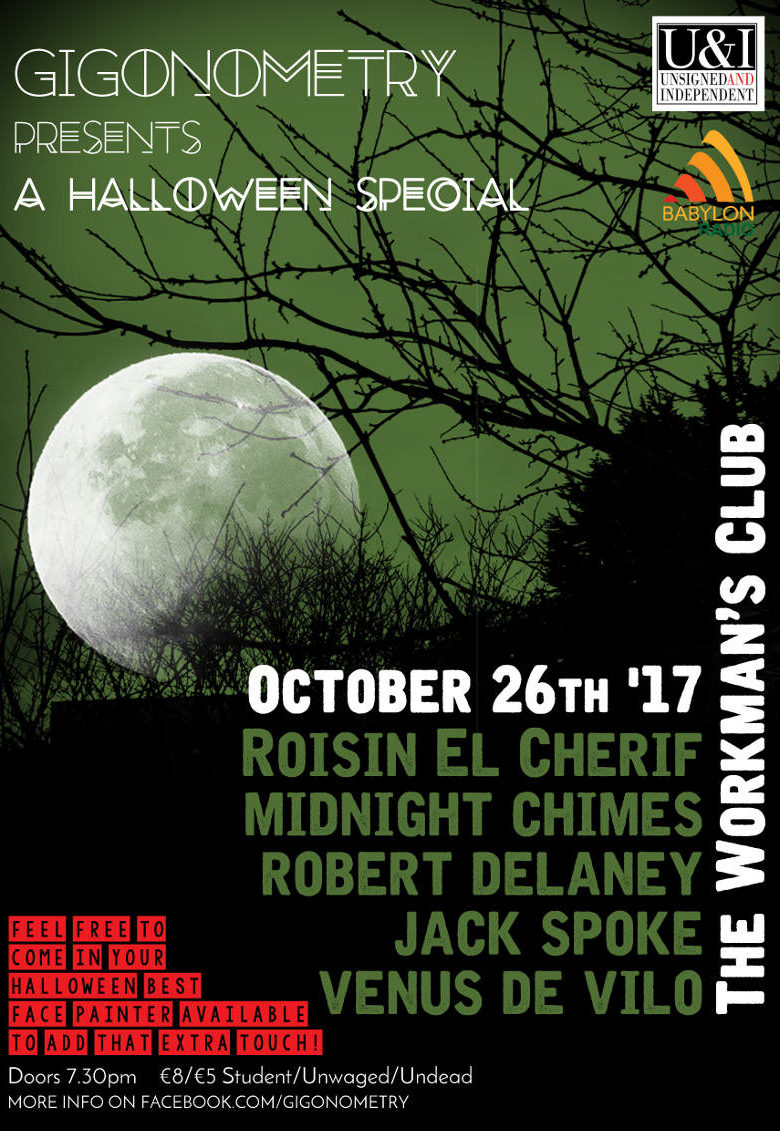