Scoops, The Crayon Set, We, the Oceanographers & Dave Conway

Press Release
The July line-up is eclectic, interesting and entertaining, it’s contemporaneous and old-school in equal measure, and you’ve just gotta be there to experience it!
Scoops
One of the most exciting acts on the Irish scene right now, Scoops are set to take it to the next level. Anyone who has witnessed their live show will know what to expect; fast and furious, melodies spilling out all over the place, and the lads bouncing around the stage immersed in the pure pleasure of it all. They recently sold out Whelans main venue for their EP launch; no surprise as they are hot on the heels of some high profile support slots to the likes of Walking on Cars, Hudson Taylor, Hermitage Green, Keywest & The Academic. All this after a frenetic 2015 when they played nearly 50 shows in Denmark, Sweden, Germany and the UK.

The Crayon Set
The Dublin-based 6 piece first came to prominence in 2011 when they won a national competition to play the main stage of the Benny & Jerry’s Music Festival in London (with the likes of Ash, Ocean Colour Scene and Fun Lovin’ Criminals), and were a Whelan’s Ones to Watch band for 2015.
The interim years have seen a self-released debut album in 2013. It was recorded in Leeders Farm Studios in the UK and co-produced with Nick Brine (Teenage Fanclub, Super Furry Animals).
They released a new single “Attack” in 2014 which The Last Mixed Tape made their single of the week. The band have just finished recording their 2nd album, ‘Lost Languages’, with producer Gavin Glass (Orphan Studios), scheduled for release in 2016.

“The Crayon Set are as catchy as a virus. If you’re looking for the kind of purity in indie-pop that you thought had gone missing far too many years ago, then their debut album will see you so right you’ll never be wrong again”. Tony Clayton-Lea, The Irish Times
“Perfect Pop”. Hot Press
“4/5. An indie orchestra favourably compared to the likes of Arcade Fire and Belle & Sebastian.” Mark Kavanagh, The Daily Star
“This is an album packed with up-tempo infectious indie from a group with a gift for creating memorable hooks”.Entertainment.ie
“Recalls the sounds of bands such as Belle & Sebastian and Camera Obscura, from the girl-boy vocal interplay to the proliferation of warm, organic instrumentation that bumbles wistfully from song to song. They make an effort to maintain impetus and vary their style throughout. A charming debut”. Lauren Murphy, The Sunday Times

We, the Oceanographers
We, the Oceanographers are a lo-fi DIY band from Dundalk. 2015 saw them release their debut album in March on 7″ Vinyl, a European tour with dates in Sweden, Denmark, Uk and Ireland, a slot at Hard Working Class Heroes, nominations for band of the year by Pure M magazine and album of the year by the last mixed tape and a limited run of a Christmas single on 7″ Vinyl. So far, 2016 has seen a Spring UK tour and the writing of a follow up to their

“Shortlist for ‘Best Irish Act’ in Pure M awards 2015. It is clear from the album that this is a band who know who they are as musicians.” – Pure M Magazine
“This is exactly what I need to be listening to right now, it’s like the audio antidote for a very stressful day.” – Phil Taggart, BBC Radio 1
“8/10, a confident and well-crafted introduction to group capable of more, and will most certainly deliver on that promise.” – Stephen White, The Last Mixed Tape

“9/10. It is quite bohemian in some respects because it displays a fearless approach to being experimental” – Unsigned & Independent”

Dave Conway
Gigonometry founder and host, former front person of hotly tipped Trip Hazard and currently of The DC Experiment, Dave plays his first live show in over a year to open up proceedings. Drawing on material from The DC Experiment, his solo ‘Highs and Hellos’ album, and more recent unreleased material, the set promises to be engaging for those familiar with his songs as well as newcomers to his musical world.
The gig is also the launch for his first piano-based song and video, Wings of Dust. 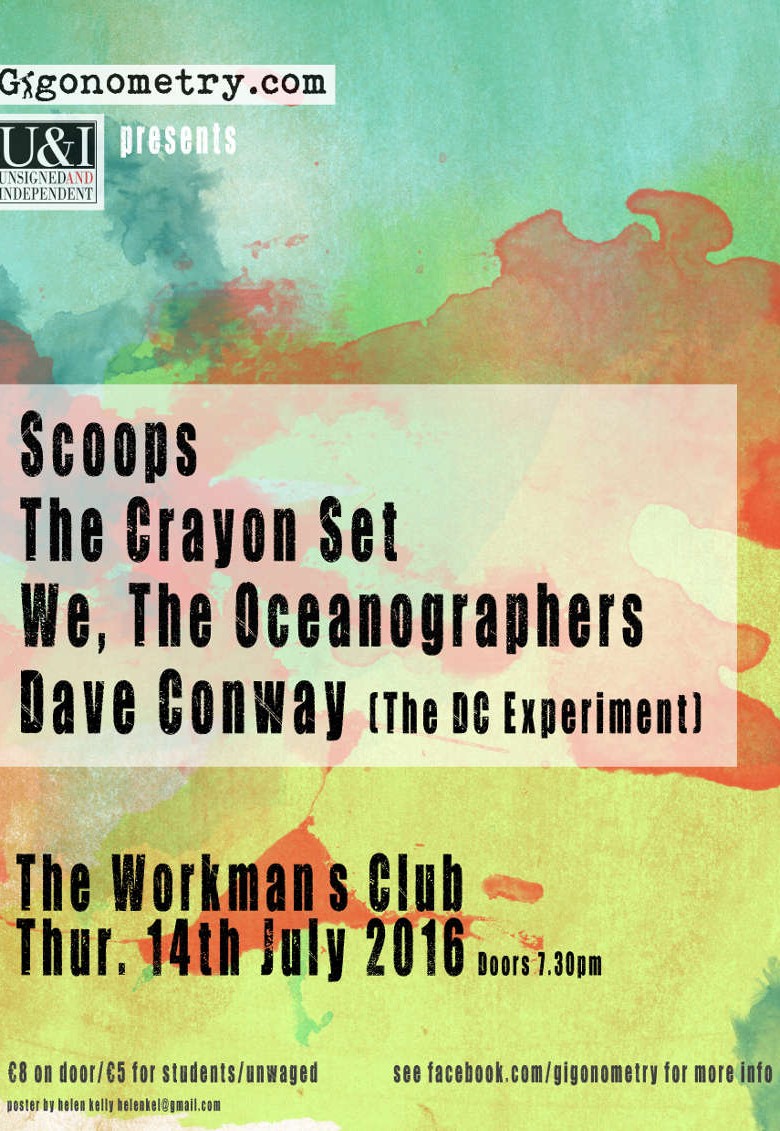