The Revellions are a garage-psych rock 5-piece band based in Dublin. With two albums already under their belt, the prolific quintet are currently in the process of recording their third. They have toured extensively in Europe, taking in Germany, France, Norway and the UK, and undertook a major tour of Spain earlier this year.

Anna-Liese are a four-piece Waterford-based band. Their music encompasses slow tempos, melodic guitar passages, beautiful vocal harmonies, fast tempos, heavy riffs and indie-rock, yet the whole is a cohesive sewing together of the parts. This coupled with their musical education really distinguishes Anna-Liese from many other acts. Regardless of how you label Anna-Liese, you can be sure there is something for everybody in its repertoire.

The 4-piece have acquired some much deserved street-credibility with a number of gigs under their belts, predominantly in Waterford & Kilkenny, and in 2016 released their EP “Chasing and Fading” to critical acclaim. Their tight and thoughtful live set has seen them become a viable force on the Irish original music scene, and 2017 has seen them step up a gear both in terms of touring but also in the recording of their second EP ‘Stand on my Own’ which will be showcased at the Gigonometry gig.

Modesto are a four-piece rock band from Dublin. They introduced themselves to the Irish music scene in 2016 and played packed out shows in Whelans, supported HamSandwich and showcased the band at Electric Picnic. Since then they have spent 2017 writing and recording new songs, and playing shows around Dublin. They’ve got a heavy blues rock sound, influenced by many, including the likes of Black Keys, QOTSA, Led Zepplin, Foo Fighters.

Creating songs to paint pictures of nostalgia, Mike takes a unique approach to song writing, crafting simple, vocal driven melodies with songs that speak for themselves.

Originally the frontman of the rock group Travis Oaks. Mike toured Ireland and abroad, playing venues such as The Olympia in Dublin, to the prestigious Dublin Castle in London. Since departing from the band in the Summer of 2016, Paterson has been hiding out in his native county of Cavan, contemplating his role in the music scene.

“It all started with me, not only thinking about “striping back” my sound, but totally re-evaluating my approach to songwriting”

Paterson plans on using this stripped back approach to gig as much as possible, with Live recordings and videos taking priority over studio recordings. His first live single, Outside Lines was released on May 30th 2017. 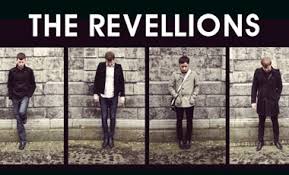