€8/€5 for students and the unwaged

The October line-up sees the much acclaimed Buffalo Sunn making an all too rare Dublin appearance after their trip to SXSW earlier this year, whilst FLECKS are a band definitely on the ‘up’ and will bring their atmospheric songs to us on the back of a great performance at Electric Picnic. Dreaming of Jupiter are straight out of the blocks as a ‘ones to watch’ on the strength of their debut EP, and our line-up is completed by the wonderful Maria Kelly, a recent ‘Irish Artist of the Week’ choice of Nialler9 in his Irish Times column.

“Gigonometry has become probably the finest new music night in Dublin. The consistent quality of the bands is unmatched and for eight euro on a Thursday night, you won’t find better value in town.” Pure M Aug 16

Buffalo Sunn are a Dublin-based cosmic-rock band. They incorporate sounds from the 60’s right up to the present day, mixing big reverb-laden harmonies with carefully placed guitars to take the listener on an epic song journey. They are currently hard at work on the follow up to their 2014 debut, By The Ocean By The Sea, which they began recording with Grammy-winning producer Joe Chiccarelli in Los Angeles in early 2016. Buffalo Sunn have also gained a reputation for being a formidable live band, noted for their three part vocal harmonies, with inventive guitar and percussion. Channeling that West Coast sound ‘like a punked up Crosby Stills and Nash’ (as one Asian journalist noted), they mix melody and guitar attack with superb effect, with songwriter, guitarist and vocalist Daniel Paxton masterminding the band’s sound superbly. They have brought their acclaimed live show to the US, Germany and Singapore, including the internationally renowned festivals SXSW, CMJ, Music Matters, Oxegen, and Electric Picnic.

Buffalo Sunn – Told You So

“A strong, intuitive sense of West Coast US music” – **** The Irish Times

“Accessible and warm, ‘By The Ocean, By The Sea’ is the first step in a what will surely be a bright career for Buffalo Sunn” – GoldenPlec

“A beautiful and atmospheric vibe that is sure to deliver.” – Festival And Gig Guide

Flecks are a Dublin based electronic music group formed in 2015. The band is made up of Freya Monks, Scott Halliday, Jay Wilson and Alan Elliott. In 2014, Monks and Halliday began creating music together based on their love of 80’s movies, classic synth-pop, and dark ominous soundtracks.

Flecks first appeared on the scene after the release of their debut single ‘Distance=Distance’, a nostalgic track accompanied by a stunning video shot on Super8 film of South Africa in the 1970’s. With the addition of Jay Wilson (keys) and Alan Elliot (bass), the band released their debut EP entitled ‘Girl’, which was very well received by Nialler9, The Irish Times, The Last Mixed Tape, The Thin Air, 2FM and 8Radio.

Flecks are back in the studio now gearing up for another release before the summer is out. Catch them if you can, at this year’s Electric Picnic and Canalaphonic.

Formed in 2015, Dreaming Of Jupiter are a 3 piece band based between Dublin City & London, who’s music is a fusion of ambient and electronic flavours with soulful vocals. The genre of this music – although difficult in some ways to pin down, is an elegant blend of melodic pop with electronica, and trip hop. The lyrics have been described as deep, thought-provoking and visually stimulating. The band are currently recording their debut album from which their first single ‘Light Of My Life’ is set for release in September 2016, and have been dubbed as ones to watch and a creative force that is unprecedented on the Irish music scene. Each member brings to the table, a unique musical background and style to create a sound that features an exciting fusion of live groove and electronic ambience.

Dreaming of Jupiter was conceived when Zoé and Dave, who had been working together previously in a popular covers band in Dublin City, decided to start writing music together. Shortly after, they met Sam and after a couple of sessions, it was clear that there was a sound emerging with good feelings from all sides. Now recording their debut album, it seems all the pieces are in place for the band to create something that is fresh, exciting and new, which everyone is looking forward to.

“Something that attracts us all to the music we have grown up listening to is that unique element that speaks to us. This may be a thought provoking lyric or a groove you can’t help but move to. As musicians, we like exploring this concept. In music, we can paint ourselves into situations that explain how we interpret our lives through feeling rather than words. Using ambient sounds and live grooves we strive to bring to music lovers worldwide, an expressive and visual experience, something that we hope will be considered new, contemporary and exciting”.

Maria Kelly hails from the West of Ireland and has been captivating audiences with her ‘bare-boned’ live performance since the age of fourteen. Her music, a subtle blend of atmospheric-folk, tells humanising and heart-breaking tales, with ‘pin-drop’ vocal precision that’s impossible to ignore. Following the release of her debut single ‘Before It Has Begun’ (Veta Records) in 2015, Maria has played relentlessly across the UK and Ireland, supporting the likes of Wyvern Lingo and Paddy Casey. Her latest single ‘Black and Blue’ premiered in Consequence of Sound this summer, who celebrated her ‘silky smooth vocals’ and the maturing richness of her sound. Most recently, she has returned from an Irish & UK tour, supporting Berlin-based indie band, HAWK. In the past year she has appeared on the Other Voices Music Trail and was named ‘New Artist of the Week’ by Nialler9 in The Irish Times. She has also played venues such as Birthdays, The Lock Tavern, Whelans, The Ruby Sessions, The Button Factory, Cyprus Avenue, The Roisin Dubh, and The Workmans Club. Maria is working in the studio on new tracks for her next EP and developing her live sound with her band in preparation for a busy year ahead. 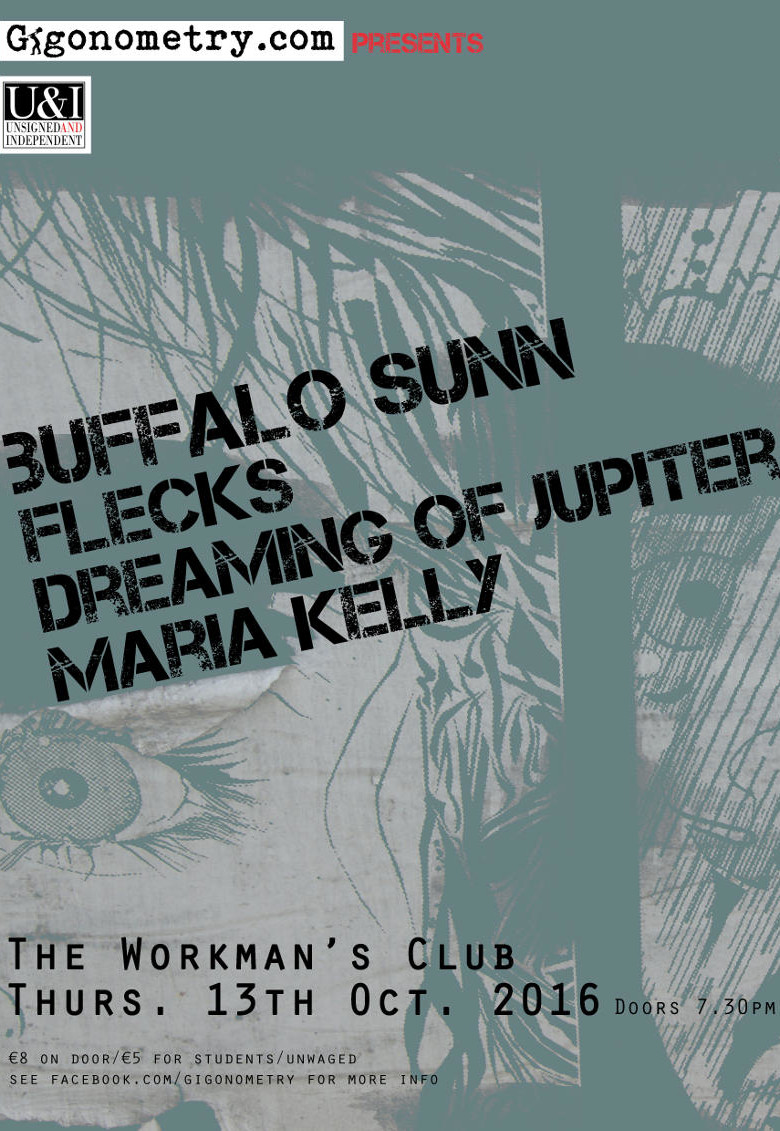