Hard Working Class Heroes are delighted to announce the day-by-day schedule for 6th, 7th and 8th  October. All details are now live on http://hwch.net/index.php/schedule/.

HWCH 2016 will take you on a musical jaunt around Dublin City north and south dipping in and out of exciting spaces including creative hub Chocolate Factory on Kings Inn Street, and Japanese hidden gem Tengu. In addition the iconic City Hall will play host to a selection of stripped back performances from artists on the Friday and Saturday night of the festival. Presented in partnership with Dublin City Council, HWCH are excited to witness this historic venue meet the cutting edge of new Irish music.

Kicking off a three-year project to build audiences between Ireland and Iceland, HWCH are delighted to welcome Wesen and aYia this year. Iceland Airwaves Festival booker Grimur Atlason will also be in attendance as part of our international industry delegation.

A number of 2016 highlights have already enjoyed national and international exposure. Loah, a self-described ‘artsoul’ singer of Sierra Leone and Irish heritage and former pharmacist from South Dublin, embraced her artistic calling during a sojourn in Brooklyn, where she easily fell in with the local music scene.   The amazing drummer and one-man-band experience Jeremy Hickey, known as R.S.A.G., is currently working on a new album with producers Leo Pearson (U2, Elvis Costello) and James Darkin (Kanye West, Rhianna).  Singer-songwriter Tara Lee, who recently signed a publishing deal with BMG/Chrysalis, is already known to international audiences for her supporting role on the Gillian Anderson TV series, The Fall. Rusangano Family, Wyvern Lingo, Talos, Bitch Falcon and more played to packed tents over the weekend at Electric Picnic.

Tickets on sale now via Dice

Catch 100 emerging acts in venues across the city and learn valuable tips from the leaders of the music industry. Weekend Tickets €45, Nightly Tickets €20, Individual Venue Tickets €10.

For both Irish and international music professionals and music fans, HWCH is an essential one-stop

shop for new Irish bands. See festival website http://hwch.net for updates on the weekend in the lead up to 6-8 October. 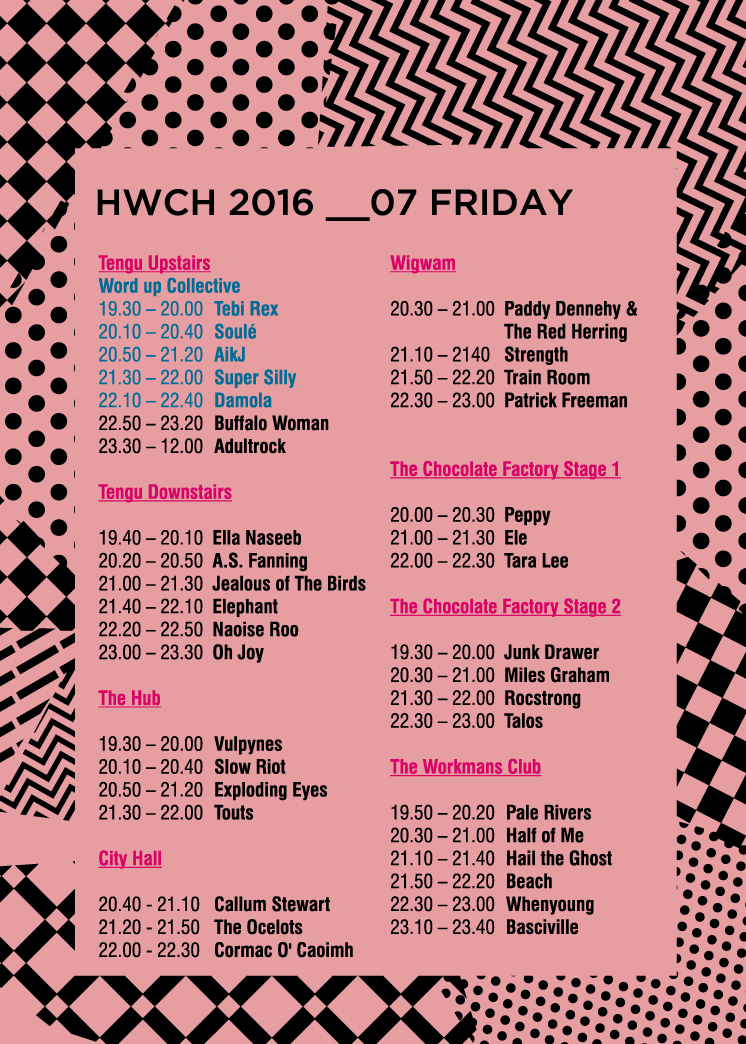