Over a squalling chaos of improvised guitar and squealing sax, a primal female voice cries out to out to Exu, the gatekeeper of the Afro-Brazilian religion Candomblé. This is the sound of Metá Metá – vocalist Juçara Marçal, saxophonist and flautist Thiago França, guitarist Kiko Dinucci, bassist Marcelo Cabral and drummer Sergio Machado – Sao Paulo’s most sought after quintet come to Ireland, bursting from their home city with a dirty brew of psychedelic samba, distorted jazz and Afro-punk.

On their sophomore album MetaL MetaL they mix these spiritual and rhythmic foundations with influences ranging from Afrobeat to Afrosambas, punk rock to be-bop, creating chaotic, life-affirming music that explodes with the rage of The Stooges and Sonic Youth, the spirituality of John Coltrane and Sun Ra and the avant-garde instrumentation of contemporary experimental jazz outfits such as Melt Yourself Down and Polar Bear.

Formed in 2007 the trio transcends musical genres, transforming traditional religious songs into a mix of psychedelic samba, jazz improvisation and Afro-punk. The folklore influence is inspired by Candomblé, one of the many Afro -Brazilian religions where each Orixa/Orissa (deity) has her own singing and rhythms. Thiago’s sax-playing adds serious experimental traction, one moment somersaulting countermelodies over Kiko’s guitar, the next diving low to provide the brassy bass to Juçara’s commanding vocals.

Don’t miss this debut Irish performance of this exhilarating band, described by legendary Nigerian Afrobeat drummer Tony Allen as “the inventors of the new music scene in Brazil”. 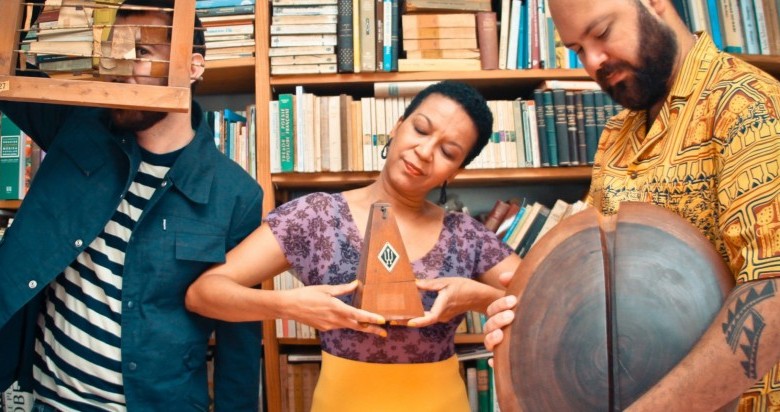