Widely considered to be one of the finest songsmiths of his generation, Dublin-born Mark Geary today announces details of a five-date autumn tour in Ireland with The Strawhall House Band.

Kicking off on Wednesday 16th October with a fully-seated gig at the ​Workman’s Club in Dublin​, Mark Geary + The Strawhall House Band will go on to play four other renowned music venues around Ireland: ​Campbell’s Tavern in Headford​, Co. Galway (Sat. 19.10); ​The Black Box in Belfast (Sun. 20.10); ​DeBarra’s in Clonakilty,​ Co. Cork (Thurs. 24.10); finishing up in ​Cleere’s in Kilkenny​ on Saturday 26th October.

Mark Geary has just returned from sold-out tours in Italy and Switzerland. This is the first full tour that he will play with The Strawhall House Band April 2019.

Mark Geary rose to prominence playing alongside the likes of Jeff Buckley, Sinead O’Connor and ​Katell Keineg at the famous . Over the last 20 years Mark has toured all over Europe, the US and Australia, and has shared the stage with performers such as The Swell Season, Glen Hansard, The Frames, Josh Ritter, Bell X1, Coldplay, Elvis Costello, The Pretenders and Joe Strummer.

The Strawhall House Band features Fiacre Gaffney, Jack Maher, Vinny Kilcullen and Mark Penny. The band formed from the long running Monday night session at the iconic Strawberry Hall Pub on the Strawberry Beds Road in Dublin. Alongside original songs from their debut album Six Days in May, released in May 2017 on Plateau Records, the band’s repertoire includes covers by great songwriters such as Lowell George, Ry Cooder, John Hiatt and Guy Clarke.

It’s this infusion of Americana on the new version of ​Rosebud that adds a distinctive layer which compliments Mark’s already unique style.

Mark Geary says: ​“Playing with The Strawhall House Band is an incredible experience. The idea that I know before I even play a note that every choice they make is going to be appropriate for the song is astonishing. For me as a singer, that doesn’t just happen. But with these guys, it happened overnight. ”

Strawhall House Band frontman Fiacre Gaffney says: ​“There’s a wonderful thing that happens when you’re playing and you don’t have to think about what the other people should be doing. It’s total trust. You meet somebody for the first time and you know you’re on the same wavelength.” 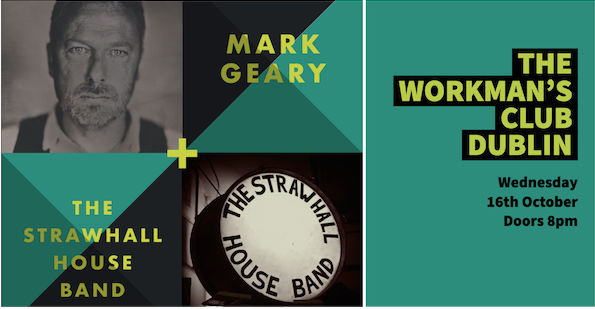