Sunday 1st May marks yet another WMC all-out-big-banker and we’ve got something VERY special in store for you beauties.

We’ve got a belter of a live line up for you. First up, Segrasso. Formed in 2013 by Jake and Hugh, but following a few line-up changes, they are now a five piece. They released their first EP, ‘Headaches’ in January 2014, following it up with 2015’s ‘Too Late and No’. Their most recent release, ‘Jokes to Tell’ is proving to be their best work yet, moving away from the shoegaze sound of their earlier EPs and branching instead into the territory of noise pop, with more melody-driven songs, and more energetic performance.  Savage. Then, get psyched to check out Sun Mahshene. Lead by Nathan Henderson, Sun Mahshene is a collective of musicians from Dublin. Their melodic hooks mixed with fuzz and grit delivers a sonic wall of sound. Nice! Finally, taking to the stage is Beach! This 5 piece band have returned from a year long hiatus with the release of their latest single ‘Arabia’ in November 2015 accompanied by B-Side ‘Moon Smoke’. Since their formation in 2013 Beach have developed a unique blend of psychedelia infused with elements of electronica and slacker rock whilst expanding their live show by incorporating awesome visuals to create a more immersive expression of their music. After rounding off 2015 with a string of impressive gigs, and 2016 promises to be an exciting year for Beach, starting with the recent release of their noise rock single “Donuts’ in March.

Flex yer singing skills and embarrass yer mates in The Karaoke Club on the main stage.  Then bopping along into the wee hours of the night will be your 80’s, 90’s, 00’s “Guilty Pleasures” by Colin Devine & Edward Porter, All Vinyl, All Alternative Sounds by Trev (Somewhere/ Workman’s Saturdays) & Del Kerton (This Other Kingdom) in the 9 Bar.

An unreal nights entertainment and would you believe that admission is FREE!!!! Let’s ring in the May Banker with some serious craic. 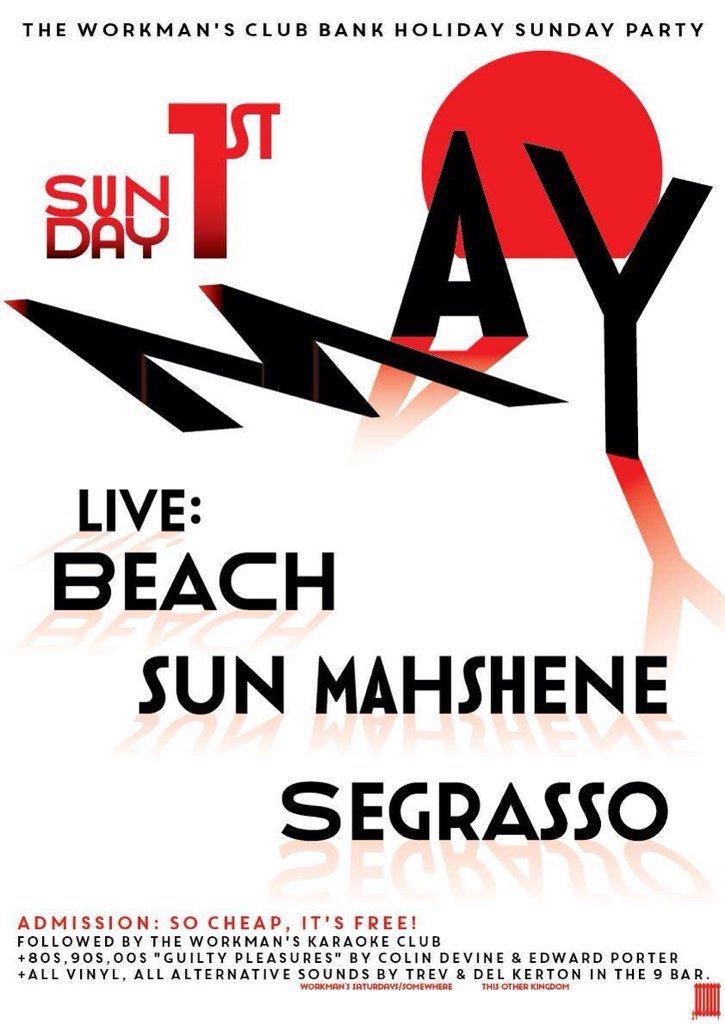