Come celebrate the centenary of the 1916 Rising with Blood or Whiskey on Easter Saturday!

Come join Blood or Whiskey for a rebellious show on Easter Saturday, March 26th 2016, celebrating 100 years since the 1916 Rising. This takes place in the Workman’s Club in Dublin, featuring  Cáit ‘Rocky’ O’Riordan  (The Pogues) and very special guests Trouble Pilgrims. The band will also be remembering a former member who passed away ten years ago, Alan Confrey (tin whistle), so a rather special night for the band.

Blood or Whiskey were formed in 1994 in Dublin and while understandably likened to The Pogues, the band’s influences lead their sound to be more accurately described as a hybrid of The Dubliners meets The Clash. To date they have released 4 albums; Blood or Whiskey (1996), No Time to Explain (2001), Cashed Out On Culture (2005) & Tell the Truth and Shame the Devil (2014).

They have toured extensively with 4 tours of the East Coast of America (three with Dropkick Murphys), a regular feature at the Rebellion Festival over the last 8 years and also have a tour of Japan under their belts. Other career highlights include supporting Stiff Little Fingers on a UK tour, opening for the likes of Manu Chao, Rancid and The Pogues in addition to playing Oxegen (2009), and Reading & Leeds twice. Across Europe the band have played consistently in the Netherlands, Germany, Switzerland, Belgium, the Czech Republic and Austria.

Their last album, 2014’s Tell the Truth and Shame the Devil, was released to critical acclaim with Hot Press calling it “devilishly good and a diabolical good listen” and gave it an 8 out of 10 rating. Although there had been a touch of ska in previous releases this album adds ska, reggae and dub to the original sound.

The first part of the Shame the Devil Tour was 16 dates that took them across 6 countries; Germany, Czech Republic, Austria, Slovenia, France and Italy. The new material broadened the band’s appeal and numbers were up across the tour! Blood or Whiskey are still playing many of the old classics as well as airing many of the more ska / reggae sounding tunes from the Tell the truth and Shame the Devil album. Renowned for their raucous shows, the re-energized band delivers their signature blend of Celtic punk like their lives depend on it!

What better to celebrate this massive occasion than in the capable hands of celtic punk legends Blood or Whiskey? 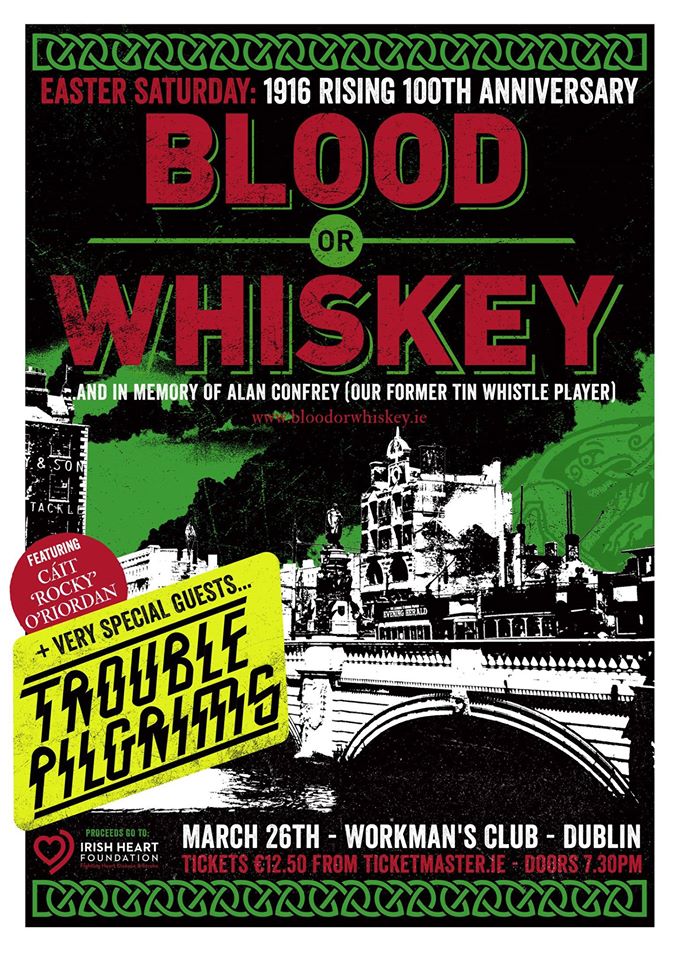