Join Scottish Songwriters Mick Hargan and Panic Anchor on the only ROI date in the beautiful Vintage Rooms inside The Workmans Club of their winter co – headline tour. Also on the bill Plasticine Porters – Amy Toolan and Anton from ATC Echoes from Mars and Ryan Cahill

Mick Hargan released his 2nd record in 2015 – he signed with Chicago based publishers GO DIY – Since The summer of 2015 he has completed 3 Self Funded tours of the United States Culminating in a show at The Hotel Cafe in Los Angeles. He has also toured the United Kingdom and Ireland thrice and been making appearances in Reykjavik Iceland – Hargan also provides a platform in Glasgow for up and coming songwriters as well as touring musicians running and coordinating some 5 live gig / Showcases per week, justifying his moniker of being the hardest working musician.

“Mick’s a man after my own heart… uncompromising hard graft, no shit and relying on no-one but himself to make things happen” – Dave Arcari

Panic Anchor is the moniker for Glasgow based songwriter Andy McBride. Starting in early 2014 he played 100 plus shows throughout Glasgow, Scotland and Europe. Panic Anchor released their debut EP – The Tennessee Sundays EP in July 2014 and promoted it during a 4 week residency at The Fringe in Edinburgh, Scotland.

2016 saw the follow up release ‘Codeine, Wine & Patsy Cline’ which included a full UK/IE tour and will follow this up with a headline European tour in September this year.

“Imagine a bluesy Lou Reed and you’re half way there….” – Glasgow Living

A folk/indie 2 piece hailing from Bangor, Co.Down,  the Plasticine Porters deliver rich harmonies and vibrant melodies, not unlike a modern day Simon and Garfunkel. The intricate guitar stylings of Rikki complement the rhythmic yet nuanced bass provided by Danny. With songs encompassing a wide spectrum of emotions lyrically and musically, this duo provide an exciting experience both live and in the studio

Touring around U.K and Ireland on and off for many years. The band’s style of music is a eclectic mix of rock /pop and Indie which is held togther

by strong melodies and soul searching lyrics. The current Album ‘Juxtaposition’ is due out in the new year .With a European tour to follow. See

them with a duo set in The workmans on the 15th.

After picking up Guitar at the age of 21, Ryan began writing songs as fast as he could while never letting go of his precious new limb. A hobby quickly became an obsession. While playing in countless venues around Dublin and the rest of the country Ryan has built a contagious energy on stage, laughing and joking with the crowd while then still holding the ability to make the entire room go quiet at a moments notice. After building strong following on YouTube through covering songs ranging from Ed Sheeran to Michael Jackson, Ryan felt it was getting time to start releasing some of his Original Music, the true passion.

Anton ( Anton and the Colts )

Frontman of Anton & The Colts and solo artist, Anton has brought his music from Glasgow to Milan, Portugal, Switzerland to London and back again. Living proof that success does not necessarily mean compromise, Anton has taken the music he loves – blues, country, folk, rock n roll – and shaped them into a potent, fresh, yet reassuringly familiar brew.

Blessed with a smoky, whiskey-soaked voice redolent of the great soul singers of Stax & Muscle Shoals, and armed with just an acoustic guitar & harmonica, Anton adds incisive lyrics to sweet melodies to create something that can reduce a rowdy bar to awed silence or rouse the most sedate venue to fever pitch.

Anton joined forces with The Colts in early 2014. Since then, they have played hundreds of gigs all over the country, hitting the UK festival circuit (Celtic Connections, the Merchant City Festival, Eden, Belladrum), playing sold out shows at Glasgow’s King Tut’s, Stereo & Nice & Sleazy’s and recording their first EP (6:45 & 450 Down).

Recent support slots with John Wheeler (Hayseed Dixie) & Ben Ottewell (Gomez) are, Anton hopes, just the start of bigger and better things. He is currently demoing songs for the first Anton & The Colts album which is slated for release spring ’17.

Amy Toolan is a singer-songwriter hailing from the borders of the West Midlands of Ireland. Her raw and untreated vocal style lends itself to her often sulky but fierce melodies and emotive performances. After returning from  A 6 year stint in London in early 2016, Toolan has spent the last 10 months  as a regular performer on the Dublin gig circuit, crafting her songs in preparation for her first EP. 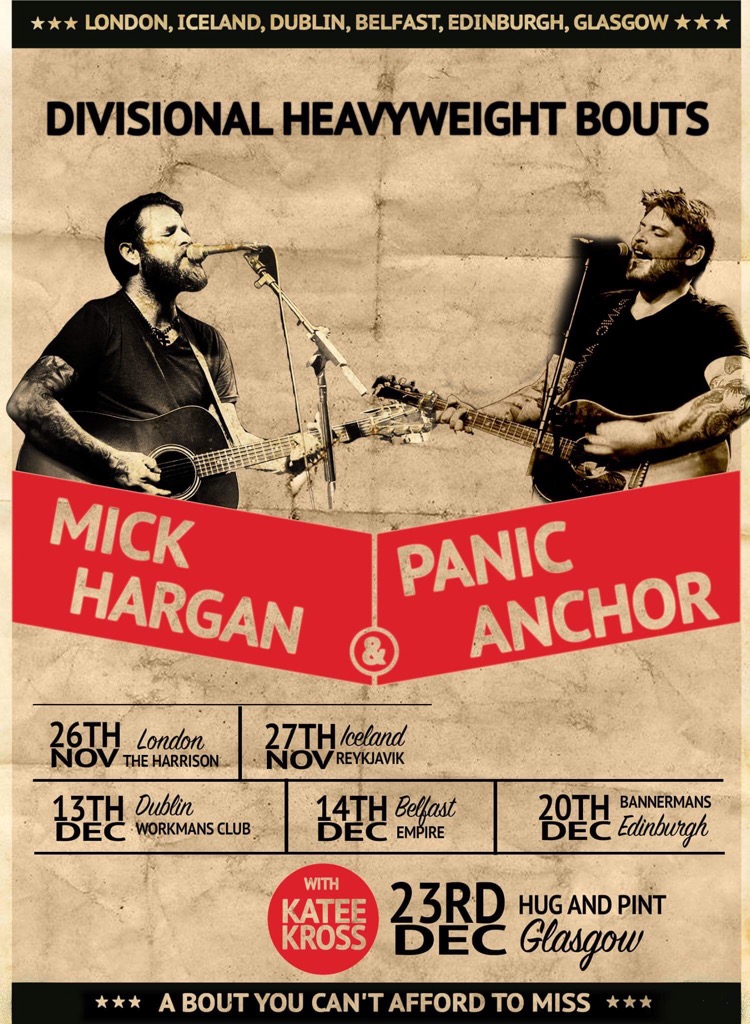