You are invited to join us before Christmas for a stellar night of Live Music at the Workman’s Club, Dublin on December 23rd.

The focus of the night is to put together an eclectic night of acclaimed acts to raise money for Doctors without borders, helping migrants on the borders of Europe. We hope to make this a Christmas gathering of friends old and new. Celebrating a magic night of being alive set to some classic tunes. This is a great opportunity to see original artists perform new material at one of Dublin’s finest venues.

Conor O’Malley is from Dublin. His music combines melody, poetry, stories, autobiography, fantasy, history and memory, to create music that is influenced by family, friends, people and the psychology of place. In 2010 Conor released his Debut album ‘Dear Ghosts’, followed by the 2014 release of the highly acclaimed ‘Dreamland Arcades’ on his own start up label – Mystery Arrow Records. He has since been working on his third Album ‘City and the Soul’ due to be released in December 2016.

God Creative God Creative and Crimes Against are a hip hop duo from Dublin, Ireland. They blasted on to the Irish music scene in 2016 with ‘Godzillah’

Lyricist God Creative and producer/vocalist Crimes Against (Ghost Estates, Sickboy) were quickly brought to the attention of director Mark O’Connor who featured the track and several unreleased album tracks in his upcoming film Cardboard Gangsters, Damien Dempsey also invited them to play support in Vicar St and Mandella Hall. With rave reviews and only a handful of quality shows the stage is set for their next single ‘Give Me Your Pain’ with a video featuring Love Hates John Connors due for release very soon!

Daniel McDermott is an Irish composer, guitarist, pianist and producer. He studied in Queens University Belfast, Dundalk Institute of Technology and Trinity College Dublin. his music fuses elements of jazz, classical, world, minimal techno and electronica. His classical music has been selected by the Crash Ensemble for Free State 7 and awards include the IMRO music award. He has released two electronica albums; his second, From nothing to nothing was released on London record label Malatoid records.

Médecins Sans Frontières/Doctors Without Borders (MSF) is an independent international humanitarian organisation that delivers emergency medical aid to people affected by armed conflict, epidemics, natural and man-made disasters or exclusion from health care in more than 60 countries around the world. Many are refugees who need help and are fleeing conflict zones of Iraq, Syria and Afghanistan. Others are human beings like us who are trying to escape political oppression.

Music Without borders is a not for profit live music collaborative which aims to raise money for children and migrants in war torn regions. 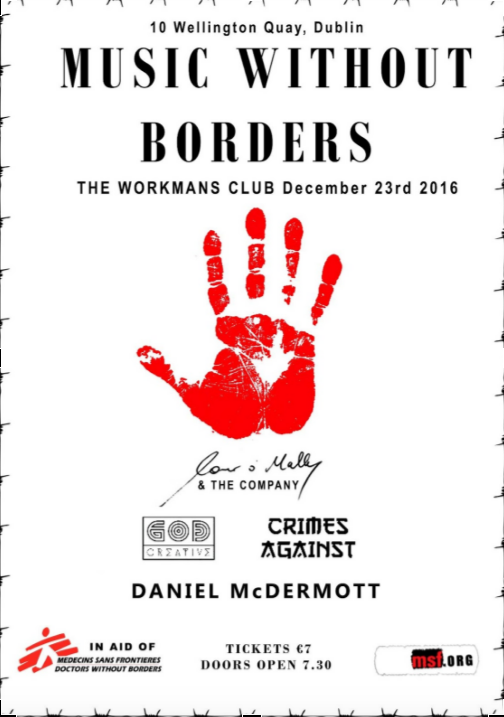