WE ARE WORKMAN’S PRESENTS

brought to you by Roe&Co

“Naoise Roo’s deep and powerful vocals are stunning, and album ‘Lilith’ is a dark and multi layered listen”

“With a voice that could silence a room, Naoise Roo has created a stunning collection of dark rock majesty..(she) has tapped into something quite special, barging through tales of heartbreak and sex with unflinching honesty, and backed by a guitar sound that’s equal parts furious, brooding and ominous.”

NAOISE ROO, as both a songwriter and a performer, is an undeniably powerful force and we cannot wait for her full band show at The Workman’s Club on Friday, 1 November as a part of our We Are Workman’s Series.

Since 2015,  Roo has seen her audience grow and grow with a swath of electrifying live shows and the release of her debut album ‘Lilith’ which was met with faultless critical acclaim. ‘Lilith’ is a force of nature, its daring truthful songwriting shows a commanding presence that insists you sit up and take notice. The musical styles range from hard grunge, to ambient electronica, lush indie rock and Jacque Brel-channeling burlesque. The diverse influences in her music have drawn comparisons to Radiohead, PJ Harvey, Nick Cave and Amanda Palmer. The LP was produced by Elder Roche (Myles Manley) and engineered by Liam Mulvaney (Girl Band, Buffalo Sunn), Lilith also features guest vocals from Sive and songwriter Joey Gavin.

Fully formed from the outset, Naoise Roo has left audiences and critics awestruck. On Lilith we find a highly accomplished and enthralling insight into the emotional and musical range of the emerging songwriter,  the same which can be said about her debut EP ‘Sick Girlfriend’ – a four-track exploration of themes surrounding depression, the challenges of the music industry and the oppressive stereotypes that burden women experiencing mental illness – set for release early next year.

After a brief hiatus from the Irish music scene, Naoise Roo has made a triumphant return with her latest single release ‘Black Hole’, which is just the tip of the iceberg for what lies ahead for this iconic artist.

WE ARE WORKMAN’S PRESENTS

TICKETS €10 ON SALE NOW FROM TICKETWEB.IE 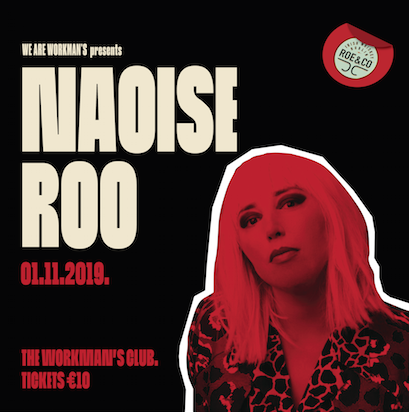