This New Year’s Eve there is only one place for craic bandits and revellers to be – that’s our place. Join us at The Workman’s Club for a serious night of proper LIVE MUSIC from 2 of the most exciting live acts around.

Here’s the scoop: We’ll have a night of unadulterated fun. First up, live music from HAVVK,  THE ALTERED HOURS – followed by a blistering headline slot from the most brilliant BITCH FALCON. After that? Live DJs til v v v late. Stay in the Main Venue or venture up to one of our 3 bars upstairs, where even more DJs will be banging out the best tunes til late.

With nods to Warpaint, Radiohead, and Sleater Kinney, HAVVK produce a haunting and dynamic sound that steers the listener from moments of immersive shoe-gaze to thrashing punk rock. Now living in Berlin, they’ve toured, played tonnes of shows, received lots of amazing reviews – and released their single Glass  in August.

Cork quintet The Altered Hours have been described as ‘concise, intense, and impossible to ignore” by Clash and “Powder-keg stuff that should be handled with care” Crack Magazine.

After a year’s worth of touring in support of their debut album ‘In Heat Not Sorry’, the band went on to release ‘On My Tongue’ – a fast-paced and grittier recording to their debut. Clocking in at just 15 minutes, On My Tongue is a window into the rock and roll heart of the group. They have twisted and reshaped their normal sonic attack into something altogether new and mesmerising. The EP has subtle highlights of post-punk, psych, neo-psych, shoegaze and riotous rock & roll all bundled up into one almighty white knuckle sonic thrill ride. YEOW, sounds sweet to us!

Our headline act for the night is the seriously deadly BITCH FALCON.

“Whatever ‘it’ is, Bitch Falcon have it.”- Una Mullally, The Irish Times

“One of the best Irish bands around.” – Dan Hegarty, 2FM

“An unforgettable name and a sound so heavy it could cause earthquakes.” – GoldenPlec

Four years on from an initial explosive emergence, the Dublin-based three-piece haven’t so much discovered their voice as relentlessly refined it. If anything, they relish in sharp declarations, their signature sound always moving forward even when throwing a nod to the past. The aesthetic is raw, even a touch frenzied, yet the chaos is controlled in a ferocious through line that harnesses the strongest elements of rock, grunge, metal, hardcore and melodic electro-pop. Through it all, Bitch Falcon make this busy mix sing in a distinctive, once-heard-not-forgotten voice. Pulsating tracks like ‘Wolfstooth’, ‘Syncope’, ‘TMJ’ and ‘Clutch’ reveal a band unwilling to sit still and stay quiet. These are songs of punch, grit and verve. Up close and personal, they make an even greater impact as the band’s deserved reputation as one of Ireland’s most engaging live prospects comes to the fore. In their short time together, the trio have shared the stage with the likes of Fucked Up, Torche, The ZZZ’s, Glen Hansard,No Spill Blood, Pussy Riot and Les Butcherettes, unapologetically stealing the spotlight at every turn.

Bitch Falcon have packed rooms in Toronto and Montreal for Canadian Music Week and POP, released 3 singles, played numerous shows in the UK and featured in festivals like Electric Picnic, Other Voices, Castlepalooza, Sea Sessions and completed two headline Irish tours. They opened 2018 with a blazing show at Eurosonic. AND NOW….they’ll open 2019 with YOU. AT OUR GAFF.

Plus, we’ve got our awesome resident DJs taking to the stage -gorgeous devils with banging tunes, the lot of ‘em.

For those of you bananas enough not to attend the fantastic NYE live offerings, you can head in and check out all the  tunes pumping across 3 rooms on the night and admission is ABSOLUTELY FREE.

Meanwhile Downstairs after the bands have finished, the very excellent Sister Lisa Marie will jump on the decks to play a selection of the best,worst and criengiest 80s,90s,00s “Guilty Pleasures”. 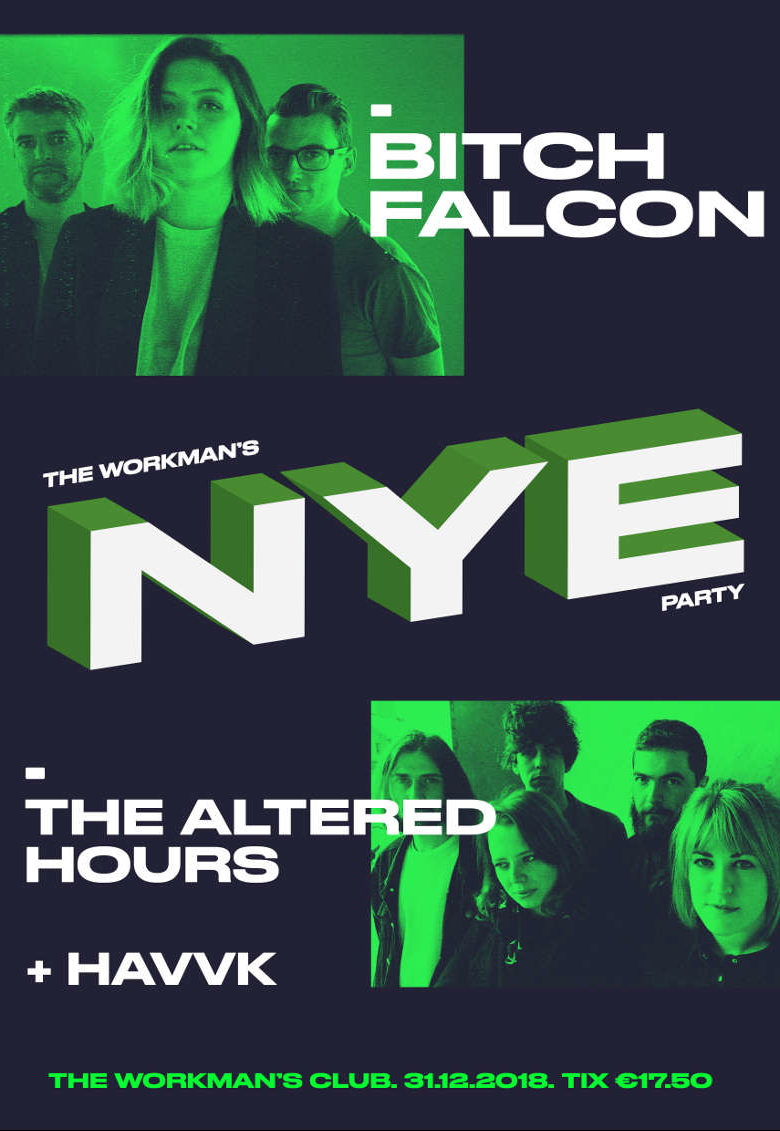