Don’t have a Paddy’s day planned? We have you sorted! The Workman’s Club, Bison Bar & BBQ and Garage Bar are the pot of gold at the end of your proverbial rainbow! Over 16 and 17 March  these three venues will be chocoblock with DJs, live music, craic and ceol, all to help you revelers celebrate the greenest day in the Irish calendar in shhtyle!

On Saturday, 16 March, to get you revved up for the main celebrations  The Workman’s Club have  a night absolutely packed to the seams with whopper choons and live acts and all for FREE, so you have loads more cash for the aul Paddy’s Day pints.

Why-Axis is a 21 year old producer and singer / rapper. His last EP Airplane Mode was met with high praise indeed. He uses a variety of different instruments from synthesizer to guitar ,bass ,samples and his own voice. He released his new single ‘Turn Around’ in November, linking up again with animator/director Elliot Ruddy to collaborate on the video they’ve had in the works for a long time. Check out the video here. ‘it’s easy to see that Why-Axis is one of the most exciting acts. His music oozes a cool and a charm…’ Nialler9

Special guests on the night include Irish hip hop artists Vinci and Khakikid.

Hailing from Dublin, headliners Silverbacks are a thrilling prospect, delivering their own louche take on NYC-indebted rock. They ply their trade with as much emphasis on the dry humour running through their lyrics as the propulsive, triple guitar-led onslaught in their music. “…infectious and breakneck” – Stereogum “Try to follow the thread of those guitars. It’s impossible. Twisting, turning and transforming like Optimus Prime in a sticky-floored club, it drives each track into cacophonous, explosive territory” – NME

They’ll be joined by Dublin four-piece Odd Morris. Influenced by Twin Peaks, Radiohead, Beach House, The Strokes, King Krule, these guys blend their melancholic poetry with uplifting melodies to create a stimulating and doleful soundscape. Their set will have you reminiscing about lost love and life’s bemusements.

Paddy’s Day falls on Sunday, as we all know. We also ALL know how deadly The Karaoke Club at The Workman’s Club each Sunday is. 2019 is where 2 worlds collide. Paddy’s Day PLUS The Karaoke Club on the same night? Everyone watch your respective houses, the craic will be INTENSE. Come sing with us, won’t ya? Kicks off at 10 bells!

Across the weekend we’ll have BANGING TUNES from our seriously deadly DJs.

Just next door,  Bison Bar & BBQ satiate your hunger pangs with the best BBQ in town. Tender, smoked meats, delecatable sides. Get super-patriotic  as you sip on a sweet Irish whiskey. With over 140 to choose from they’ll find the right one to wet your whistle.

Round the corner in the Garage Bar, 3pm-LATE – more awesome DJ Sets, so kick up some sawdust and get down for a proper loud one!

As always, this is all FREE FREE FREE, like the shnakes were when Paddy drove ‘em out.

It’s your patriotic duty to come and join us for all the craic. It’s what Paddy would have wanted. 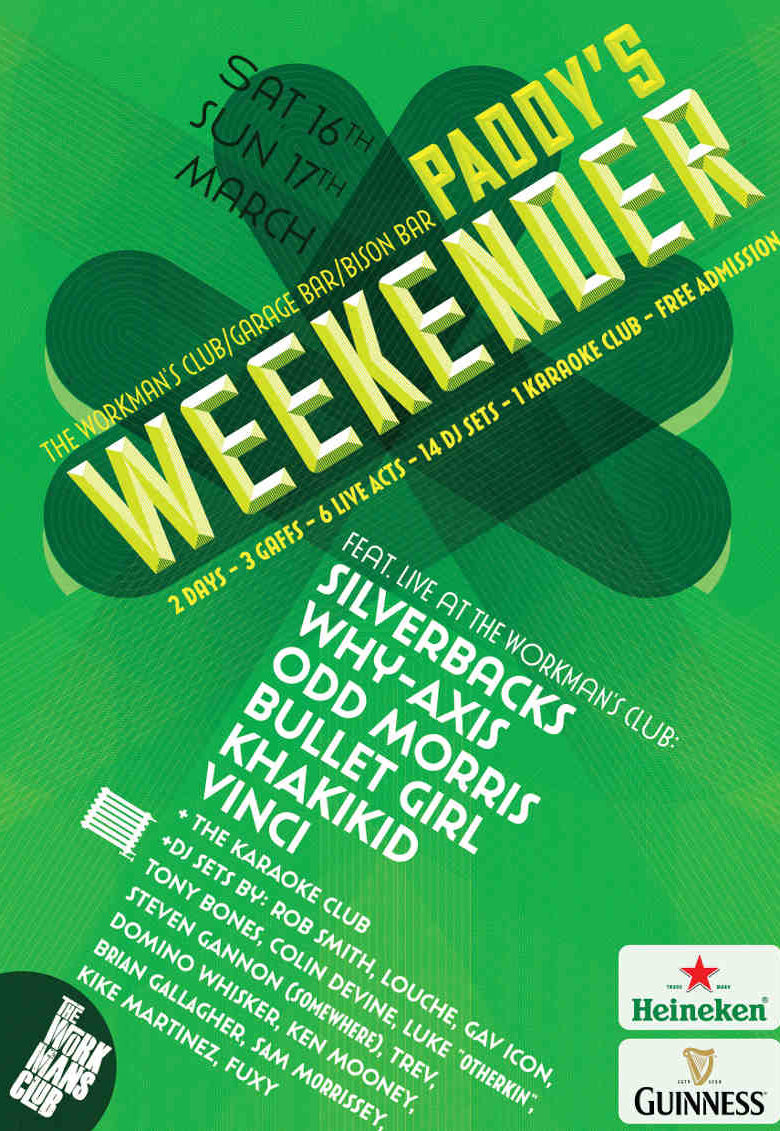