Since forming in 2019 Paper Tigers have worked tirelessly, ‘one of the hardest working acts in the country.’ (Rigsy) First three singles secured plays on iHeartRadio, Total Rock, BBC ATL, RTE2fm and Totally Irish 98fm and supports to Life and Hundredth. In 2021 the band played Climate Craic Festival at Stormont then a 6 date headline UK tour promoting new single ‘Blue Light Trails’. Recorded and mastered by Ryan McGroarty (Beauty Sleep) and Robin Schmidt (Placebo, the 1975) earning the accolades ‘authentic, infectious energy, a ground breaking act’ from YMX. Singles ‘Graceless’ and ‘Moloko’ we’re released in Nov 21 and Feb 22 with the latter earning Track of the Day (Hot Press) the band are now set to release debut EP ‘Graceless’ on April 29th.

‘Graceless’ was engineered by Ryan McGroarty from Beauty Sleep and have mastered by Robin Schmidt (Placebo, Wolf Alice, 1975). The first single ‘Blue Light Trails’ was released in Oct 2021 and was followed by a headline UK tour, 6 dates across England and Scotland. A second single and the title track ‘Graceless’ followed in November, with the video premiering on XSNoize.

The EP is centred around how external and internal forces in your daily life can make you feel GRACELESS, forcing their way into you conscious or subconscious and impinging upon your psyche. These range from personal struggles with mental health (Graceless), searching for happiness in the wrong places (Blue Light Trails) or even in personal relationships (Moloko).

Political, dynamic, and loaded with hooks, HAVVK are a grunge-fuelled rock band based in Dublin.

They produce a relentlessly dynamic, haunting sound that steers and surprises the listener from moments of immersive shoe-gaze to thrashing punk rock. After the success of their latest singles ‘Home’ and ‘No Patience’, and now ‘Automatic’, their sophomore album ‘Levelling’ is out now,

Over two EPs, ‘HAVVK’ (2016) and ‘She Knows’ (2017), and with the launch of their debut album, ‘Cause & Effect’ in November 2019, HAVVK have constantly proved that they are unafraid to combine hard-hitting music with an equally hard-hitting message. With pulsating singles like ‘Always the Same’, ‘Birds on a Wire’ and ‘Shifting Shape’, HAVVK tackle topics such as bodily autonomy, gender expression, mental health and equality, with ferocious power, infectious hooks and an ethereal thread that runs throughout their records.

So far, HAVVK have toured extensively throughout the UK, Ireland and Germany, including their “Drawn Together” project – a 12 date UK tour which saw them team up with over 50 female and non-binary artists in May 2019 to promote equality in music. The band supported And So I Watch You From Afar and The Drums at The Lido (Berlin), as well as appearing on stages at Other Voices, The Great Escape, Liverpool Soundcity, and Hard Working Class Heroes.

HAVVK’s releases have received strong support from press including The Line Of Best Fit, Stereogum, The405 and Nialler9. They were also named as one to watch in 2019 by Hot Press earlier this year and featured in The Guardian and Irish Times. They have also been supported through radio by KEXP, BBC 6 Music DJ’s Lauren Laverne, Chris Hawkins and Tom Robinson, RTE’s Dan Hegarty, Tara Stewart and Tracy Clifford, Today FM’s Paul McCloone and Radio X’s John Kennedy.

4 Piece alternative rock group from Dublin, fusing blues-rock with post-punk. Their music, effects-heavy and moody, comes to life in the form of high-energy alternative rock that finds space to stay measured and creeping throughout. 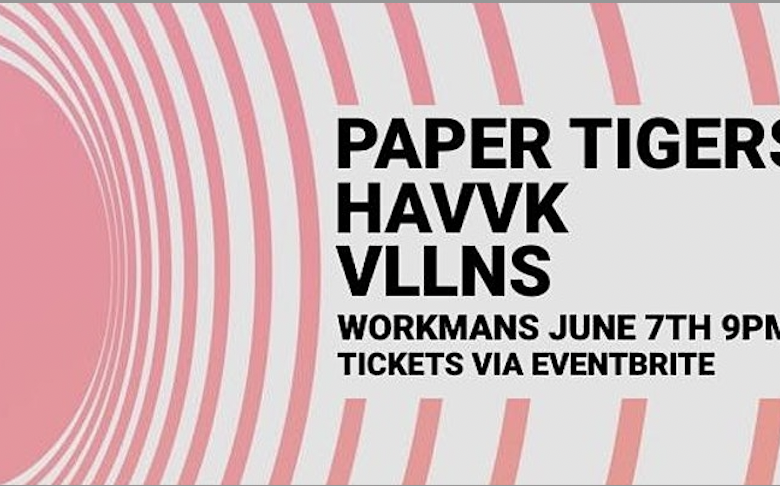