Pretty Beast host a night of alt-rock, punk and gusto on the 27th of November in The Workmans Club with special guests Bagels and Spines.

The night will be kicking off at 8pm with all-female punk-garage band Spines followed by Dublin’s Princes of Post Math Rock/Indie, Bagels, before revellers will be treated to Pretty Beast’s notoriously high octane electronic furor.

This night will not be for the faint hearted but for the music-lover with the stamina to endure such moxie from these three acts.

Ahead of this show the band have just released a live video for new tune “Don’t Think So”. Also in the bag is a video for “Raid”, set for release in mid-November..

“…some serious vocals, and guitar riffs to melt your face, Pretty Beast are the rock band that the country needs right now (even if it doesn’t know).” Dublin Concerts

Tickets for the show will be €7 pre-gig and €9 on the door. Tickets are available here or at Music Maker, Wicklow St.

Pretty Beast are a group of four lads, who are seasoned veterans of the Irish live circuit. All colliding from different ends of the city and differing ends of the musical spectrum ‘Pretty Beast’ come together to kick you in the head with their brand of in your face electro punk rock. The band fuse low C-tuned riffs with dance inspired rhythms to create a high octane, spasmodic electronica sound heard from the likes of The Klaxons and Late of The Pier. Each band member draws on their diverse influences ranging from Tool to Daft Punk and even Joy Division.

In the few short months since their inception they were given free rein over The Meadow studios with recording engineer and producer Rían Trench (Solar Bears, Leo Drezden). The result was an apocalyptic sounding debut EP entitled ‘Content’

Pretty Beast released their EP on the 23rd of June 2015 via their website prettybeast.ie

Following on from their successful debut EP launch in June, Pretty Beast went on to give a well reviewed performance at KnockanStockan 2015.

“Pretty Beast delivered a straight-up hard rock sound with streamlined cohesion that bands who’ve been on the road for years could only aspire to.” – GoldenPlec 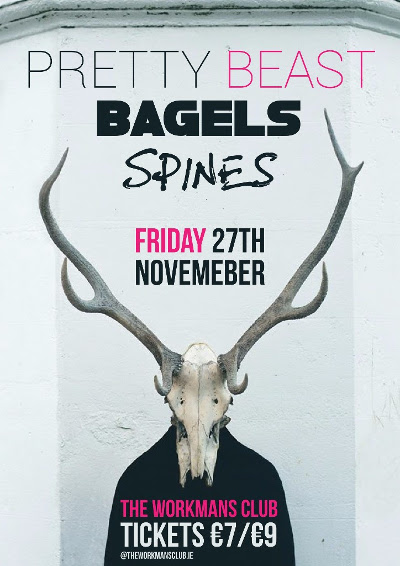