Princess Goes To The Butterfly Museum

Due to recent restrictions this will now be TWO 50% capacity seated shows. Ticket holders will be notified which show their ticket is valid for by email.

(Irish Debut)
Workmans Club, Dublin
8th December 2021
Princess Goes to the Butterfly Museum, are an indie/pop/experimental band featuring actor Michael C. Hall (of Dexter and Six Feet Under), drummer Peter Yanowitz (the Wallflowers) and keyboardist Matt Katz-Bohen (Blondie)
They make their Irish debut this December at the
Workman’s Club, Dublin.
Tickets €22.50 + bk fee are on sale now
from Ticketbooth and www.selectivememory.ie
They released their debut album “Thanks for Coming” in February 2021 to critical acclaim
Last week they released the video to their latest single Nevertheless – a homage to 80’s style synth pop with a video influenced by Ah-ha’s ‘Take on Me’ and Dire Straits ‘Money For Nothin’ 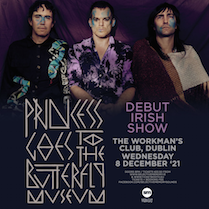