ROB CORCORAN AND THE NECESSARY EVILS

Dublin troubadour Rob Corcoran is a solid favourite on the London/UK folk and Americana scene, with his songs already being covered by Irish folk legend Christy Moore. His lyrically compelling, beautifully observed songs are drenched in Celtic soul, drawing from the same deep wells as Van Morrison and Mike Scott. The heart-on-sleeve poetry of his North American influences (John Prine, Hank Williams, Leonard Cohen, etc) runs through his songs, Rob’s 2017 album Inverse Alchemy has blown away reviewers at AmericanaUK, Fatea, JazzFM, and many others.

Rob’s live shows, be they solo or with his very international alt-folk supergroup , ‘Rob Corcoran & the Necessary Evils’, always leave audiences calling for more. He recently opened for Mary Coughlan in the UK, and was booked to play in Uzbekistan in June 2019 but diplomatic channels between London and Taskent aren’t so great and it was cancelled at the last minute. Rob was hoping to find out that he is the “Sugarman of Uzbekistan”. He once dreamt that Annie Lennox knicked one of his songs, so he has an irrational distrust of her ever since.

Conor O’Malley was born in Dublin. His music mixes melody, stories, poetry, autobiography, social consciousness, history and memory, to create an inimitable style of music that is influenced by family, friendship, culture, identity, loss and the love of people and place.

In 2009 Conor released his debut ‘Dear Ghosts’ which was warmly received around Ireland followed up by the critically acclaimed ‘Dreamland Arcades’, after relocating to the UK. His experience of this time was recorded further explored through the sounds of ‘City and the Soul’ in 2016. He has since been working on his 4th Album to date since returning to live and work in Dublin; a collection of new songs entitled ‘Keep on Down the Road’.

​Working with great live and studio Musicians over the years has given Conor the wherewithal to carve his own unique sound in multiple genres. The thread and tradition of great songwriting always as the main focus of the projects. 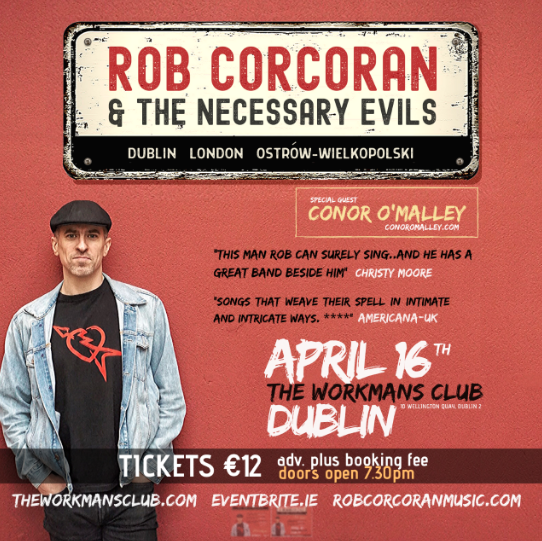