Seamus Fogarty is set to embark on his first headline tour of Ireland since the release of his critically acclaimed debut, God Damn You Mountain, on revered Scottish indie label Fence Records in 2012.

Hailed by the Irish Times as ‘one of the best Irish albums of recent years’, it was critically acclaimed on its release.  Listing out his favourite albums for Mojo Magazine last year, electronic musician Jon Hopkins called it a ‘shambolic masterpiece’.  Now based in London, Seamus has toured with the likes of James Yorkston, Pictish Trail and Malcolm Middleton (Arab Strap) alongside a number of solo tours around Europe.  Closer to home, he has played with King Creosote & Jon Hopkins in Dublin’s Vicar Street, performed at The Electric Picnic & Castlepolooza and toured up and down the country with his friend and renowned songwriter Lisa O’Neill.

Built upon a deeply personal foundation of soul-stirring alt-folk, country, blues and electronica, his music has also garnered much praise from the BBC, featuring heavily across both Radio 3 and BBC 6 Music. In September 2015 the critics once again embraced his new EP ‘Ducks & Drakes’ with Mojo Magazine awarding it 4 stars and Gideon Coe from BBC6 Music proclaiming the title track ‘Ducks & Drakes’ to be ‘one of the songs of the summer‘.  Meanwhile The Guardian singled out his December show in London with Rozi Plain (label mate on Lost Map Records and member of This Is The Kit) as one of ‘the music gigs our writers loved most in 2015’.

Outside of his songwriting exploits, in the last 12 months he has collaborated with the Metropolitan Museum of Art in New York and the London-based experimental opera company Erratica to design and build the multichannel installation opera ‘La Celestina’ and also sound-tracked an award winning animation ‘Islander’s Rest’ in association with director Claudius Gentinetta and Swiss TV

For this tour Seamus will be joined by long-time collaborators Emma Smith (David Holmes, Hot Chip & James Yorkston) on violin & bass guitar, renowned UK drummer Aram Zarikian, most recently seen performing on Jools Holland and TFI Friday with Andreya Triana and his brother John Fogarty, one of the foremost proponents of box music from the West of Ireland.

‘lyrics that spin stories from the smallest of details, song structures that freely meander without getting lost, and production that balances the rough with the smooth beautifully’

Mojo****(The review is too weird to take any useful quotes from, but weird in a good way)

“Startlingly good debut album….a record that nestles beautifully at the point where the digital and analogue worlds collide”
The Skinny ***** 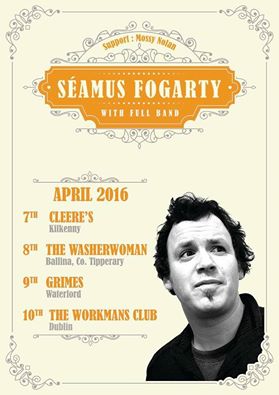