Thursday May 5th, 8pm, The Cellar

New album ‘​​for you who are the wronged’

​​Kathryn Joseph has announced details of her forthcoming studio album ‘for you who are the wronged’, due 22 April 2022 via Rock Action. To celebrate Kathryn will be performing live at The Workman’s Cellar, 5th May 22.

Unspoken truths take flight in songs that simmer and seethe with quiet anger, as Joseph gives voice to those robbed of their own. This record is a statement of abuse observed; its narrative woven with pain’s complexities, futility and stasis.

Alongside the album announcement, Kathryn has shared the new single ‘what is keeping you alive makes me want to kill them for’ with its accompanying video as the first taste of the record, and revealed plans for a 2022 UK tour.

‘for you who are the wronged’ is the much anticipated follow-up to 2018’s ‘when i wake the want is’ and her 2014 debut ‘bones you have thrown me and blood i’ve spilled’, which won 2015’s Scottish Album of the Year award.

Recorded at The Lengths Studio in Fort William, with producer Lomond Campbell, the converted old school-house offered a week-long solace to let her focus solely on the music. It’s her first co-production credit, too – and given the heart-close nature of the subject, only fitting that she’d shape its execution. The sound is spacious, honouring the rawness of her original demos, written in early 2020. The subject matter is violation – of power, of love, of access – a pain that may not belong to her alone, but she strives to make sense of what’s being enacted on others. In crafting these songs, Joseph offers a window into these toxic patterns that she hopes could save someone. 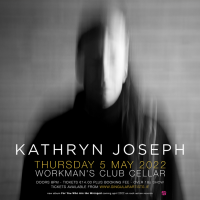